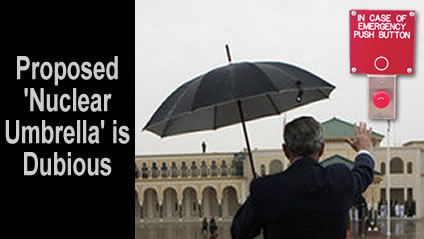 Iran’s defiant pursuit of it’s nuclear technology has already raised the specter of a nuclear war in the Middle East to dangerous proportions and the US, Israel’s staunchest ally is seeking ways to bolster it’s survival against what s expected being an existential threat looming on the Middle East horizon.

The search for viable solutions has already led to a debate over what role, if any, the new administration in Washington should play in securing Israel against what appears to be an inevitable nuclear threat from the Islamic Republic. In a dramatic turn, U.S. President-elect Barack Obama’s administration suggested, last week, to offer Israel a “nuclear umbrella” against the threat of a nuclear attack by Iran. The unidentified source, who is close to the new administration, said the U.S. will declare that an attack on Israel by Tehran would result in a devastating U.S. nuclear response against Iran. In fact, Secretary of state-designate Hillary Clinton had already raised the idea of a nuclear guarantee to Israel during her campaign for the Democratic Party’s nomination for the presidency. According to the same source, the nuclear guarantee would be backed by a new and improved Israeli anti-ballistic missile system. The Bush administration took the first step by deploying an early-warning radar system in the Negev, which hones the ability to detect Iranian ballistic missiles.

Israeli analysts have expressed concern, that by granting Israel a nuclear guarantee, Washington would essentially suggest that the U.S. is willing to come to terms with a nuclear equipped Iran.

A senior Bush administration source, refusing to give his name, said that the proposal for an American nuclear umbrella for Israel was ridiculous and lacked credibility. “Who will convince the citizen in Kansas that the U.S. needs to get mixed up in a nuclear war because Haifa was bombed? And what is the point of an American response, after Israel’s cities are destroyed in an Iranian nuclear strike?”

Of course the danger to Israel’s homeland is acute and cannot be underestimated. The number of Shahab-3 missiles in Iran’s possession has gone from roughly 30 at the start of 2008 to more than 100. The latest test of Tehran’s long-ranged Sajjil solid fueled missile technology, indicates Tehran’s determination to create a convincing deterrence against any US nuclear umbrella to Israel.

Precisely to counter an American “umbrella” strategy, Iran is currently developing it’s long-range missile technology. If its missiles will reach out to major European cities, or even, in the not so long distant future, even some US territories, then any US sponsored implementation of it’s “nuclear umbrella” on Israel will prove virtually worthless. Will any US president endanger his own people by adhering to a dubious policy, which was issued, before the US itself would be prone to a nuclear counter attack?

The nuclear umbrella strategy was first provided by the Americans for Western Europe. It was not a commitment to respond to nuclear war with nuclear war. Following World War II, the USSR had deployed huge military forces in Eastern Europe. Thousands of tanks and dozens of soviet infantry divisions could roll over Europe with virtually nothing serious to oppose them other than symbolic US forces and later a politically-prone NATO organization. To discourage any Kremlin ambitions, the United States adopted a policy whereby a Soviet attack would be met by an American nuclear strike. But even then many European experts assessed any US nuclear response, to Soviet provocation or even active aggression, to be dubious, as it would have been extremely doubtful that political constraints in Washington would sanction US nuclear weapons use, if no direct threat to US targets be instigated.

At the time hundred thousand US troops were stationed in Germany, which could have presented a clear Soviet target to nuclear attack, but still a full-scale nuclear response, if US cities would not be directly threatened, was not in the cards. Fortunately such a scenario was never put to test in Europe, during the fifty year “Cold War”.

However, facing a future threat to Israel, with it’s security placed under the proposed Obama “umbrella” would be the last thing that any Israeli administration should base it’s national deterrence strategy on. But there is much more concerning such a “umbrella” strategy. The principle reason behind the so-called nuclear umbrella was to both dissuade an adversary with a much greater nuclear arsenal (i.e. the Soviet Union) from attacking non-nuclear nations and, in so doing, to dampen the urge of non-nuclear states to seek nuclear weapons in self defense. Indeed the umbrella kept the Soviets at bay in Europe and the nuclear club elite intact.

Neither rationale applies to Israel, which according to foreign sources is already a nuclear weapons state. Based on one of the world’s “worst kept secret”, it’s alleged nuclear arsenal is, and will remain, orders of magnitude more destructive than any presumptive future Iranian capability. Some might argue, with some reason, that because Israel is a small territory, any nuclear attack would incapacitate its ability to launch a counter-attack, thereby diminishing the credibility of Israel’s nuclear deterrent. Such statements overlook the considerable investment Israel has made in building one of the world’s most sophisticated and operationally effective multi-layered defenses, designed precisely against such a doomsday scenario.

Thus in case that Iran would decide to precipitate a nuclear exchange with Israel, the results would be inevitably calamitous for both sides. In a study for the Center For Strategic and International Studies in 2007, Anthony Cordesman concluded that Israel could lose between 200,000 to 800,000 people, while Iran could suffer as many as 16 to 28 million fatalities. The large disparity in death toll derives in part from Israel’s quantitative and qualitative nuclear superiority: Israel could deliver significantly more weapons at much higher yields and more accurate than Iran.

Though Iran is a large country, its vulnerabilities are numerous: Tehran, a city of some 15 million, sits in a “topographic basin with a mountain reflector “Nearly ideal nuclear killing ground.” Cordesman wrote in his highly professional analysis. “Iranian recovery is not possible in the normal sense of the term.” In clear assessment, Cordesman’s analysis spells out “the end of Persian civilization if the Mullah’s will venture a nuclear war with Israel!

But there are other alternatives, apart from a full-scale Israel-Iran nuclear exchange. Iran can offer its own version of a nuclear umbrella to Syria or Lebanon, or even Hamastan. For example, what if Hezbollah were to stage an armed takeover of Lebanon, turn it into a Shi’ite puppet and Tehran were to threaten nuclear retaliation against any country that tried to interfere? Or, if the Mullahs were to threaten Israel with a even minor nuclear response, if Gaza would be attacked by a major military offensive? There could even be nuclear blackmailing during a high-tense political crisis, involving mega-terror scenarios with heavy human losses, which Israel will have to react against to sustain its deterrence posture. How would Washington under Barak Obama manage such a crisis situation-under a so-called “promise” to place Israel under its “nuclear umbrella” strategy?

Then there is the matter of getting Iran to believe that the US will really make good on its nuclear umbrella promise. The Mullahs of Iran can, no doubt, read history. They know that in 1956, the United States gave Israel a guarantee that they would enforce Israel’s right to free navigation in international waters. At least, that is what Israel then understood, and that is what everyone else understood. Unfortunately, in 1967, this was put to the test, and the United States found every way possible to wriggle out of its commitment, resulting in the Six Day War. Twenty four years later, during Operation Desert Storm, when Israeli cities came under six weeks of SCUD bombardment from Saddam Hussein, the Pentagon refused giving Israel the secret codes to enable it’s air force to try and destroy the missile sites in western Iraq.

Ayatollah Akbar Hashemi Rafsanjani was boasting recently, that an exchange would wipe out Israel’s smaller population but leave Iran functioning. Apparently defense expert Anthony Cordesman draws precisely the opposite conclusion. One hopes he is being heard in Tehran and Qom, if those Mullahs do not wish to embrace national suicide.

Finally, in spite of the looming threat, Israel would be wise, to gratefully waive Washington’s noble gesture and remain self-committed to its national security, without placing it’s loyal allies also in mortal danger. It did so for sixty years and there is no reason to change this proud policy.