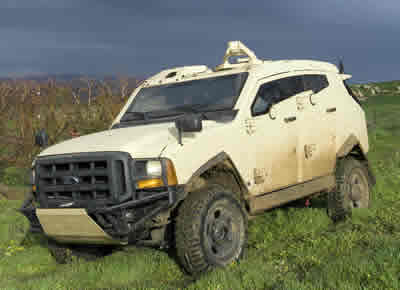 Plasan is demonstrating their vehicle armoring capabilities at Eurosatory 2006, in a new, all-protected wheeled armored personnel carrier. Unveiled at the Milipol law enforcement show in Paris, in November 2005 under the name Caracal, the vehicle was presented again in February 2006, at the Mid-America trucking show dubbed “Super Chief”. The vehicle shown in Paris has been redesigned to reflect initial responses from potential clients. While Plasan still considers the project a “technology demonstrator”, demonstrations have already taken place and are scheduled to be followed by field testing this summer, by several potential customers, including the Israel Defense Forces and US Marine Corps. Industry partners have also shown interest – latest to join was International Truck and Engines corp. which will receive a similar design for the Future Tactical Truck System (FTTS) it is developing for the US Army.

Plasan’s technology demonstrator is based on an “off-the-shelf” Ford Truck chassis cab, modified by Manning Equipment into a shorter, more maneuverable armored car. The vehicle is customized for homeland security and military applications. Civilian versions will be suitable for all types of Non Governmental Organizations (NGO) operations, such as support of peacekeeping missions, homeland security and other security applications. 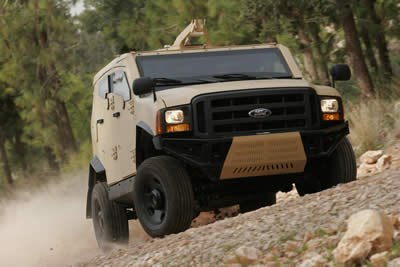 By reducing the wheel base of the Ford 350 truck from the original 136 inch to 112″ (2,845mm), Plasan created a compact, highly maneuverable five ton (11,000 – 13,000 lbs) platform, which carries four fully equipped soldiers, optimized for traveling in dense urban terrain, as well as over rough, unpaved roads. In Eurosatory 2006 Plasan is showing an improved design of the vehicle, fitted for a crew of four or five fully equipped warfighters. Currently in the works is a larger, 120″ wheel-base version, designed for a crew of six.

The all-protected hull comprises an armored box made of ballistic steel, augmented by advanced armor offering optimal protection at the required weight level. The armored hull offers the highest level of armored protection possible for a 4×4 vehicle – B6-B7 protection, stopping multiple hits of all types of 7.62 AP ammunition, mine protection and IED threats, shrapnel and artillery fragments. Different armor technologies used, include metal-composite cage built with wall-to-wall bonding enabling high integrity and roll protection without the use of heavy roll bars. Side plates are used to increase protection against IEDs. Plasan’s SMART armor matrix is also used, offering high multi-hit resistance of selected parts. The composite armor is applied on an aluminum frame, to maintain lightweight armor protection while Kevlar liners and transparent armor for the windshield and side windows augment crew protection . The trapezoid shaped side windows are designed to reduce the weight of transparent armor without reducing visibility. The vehicle’s structure is designed with oblique surfaces and strengthened with blast deflectors, increasing protection against IED and mines.

All armor components used in the vehicle are modular and replicable in the field, thus enabling rapid repair and reconditioning of damaged vehicles. Another advantage is the use of an “off the shelf” chassis and automotive system, enabling operators to rely on Ford authorized service facilities and logistics worldwide available. The use of a commercial chassis has also contributed to significant cost reductions. According to Plasan, the cost of such vehicle is comparable to the armored Defender and significantly lower than an up-armored Humvee.

Plasan built two 4 passenger, four ton versions of the tactical protected vehicle (read our exclusive test ride report) and is currently constructing two five passenger, five ton versions, to be sent to the USA. The vehicle has low-profile, roof mounted firing hatch supplied by A.O.B. and a chemical-biological filtering system, provided by Beth-El Industries. An installation of an Elbit System’s ORCWS weapon station was also tested. Plasan designed the hull with modularity to accommodate different chassis, to suite customer requirements. At Eurosatory 2006 the Sand Cat will be displayed with a Mini-Samson remotely controlled weapon station mounting a 12.7mm M2 heavy machine gun operated remotely from the inside.

The vehicle is being tested by the Israel Defense Forces (IDF) as part of its evaluation of future replacements for its light armored vehicles, currently relying on the Sufa (Israel’s Automotive Industrie’s local derivative of the Jeep Ranger). The IDF already selected the David up-armored Defender produced by Arotech’s MDT division. However, Plasan argues that their new vehicle deserves another examination, as it provides much improved performance at a comparable cost. Further tests are scheduled to commence in the USA, under US Marine Corps evaluations.

Under a separate, but similar program, Plasan has been selected by ITEC to provide armor suite design and production for the US Army Future Tactical Truck System (FTTS) program, for which International Truck and Engines corp. is developing a new armored utility vehicle. This vehicle will be modular in design, so it can be reconfigured for an assortment of combat logistics and transportation missions. The prototype vehicle is scheduled to be completed by the end of 2007. 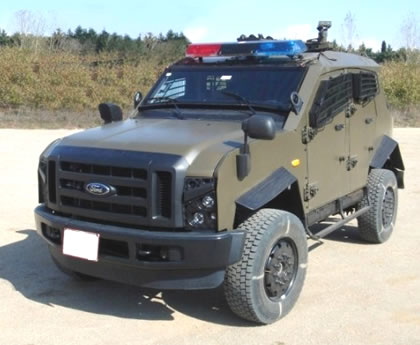 In december 2008 the Israeli police acquired SandCat armored vehicles for an estimated amount of $6 million, aiming to improve its operational capability in urban areas. The vehicle selected by the Israeli police was designed specifically for its requirements. The Sandcat design is marketed internationally by Oshkosh Defense.