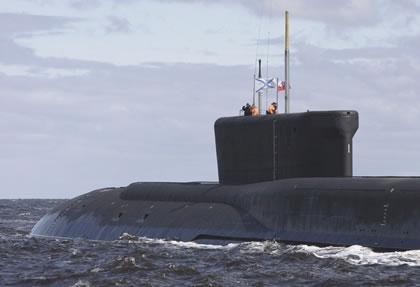 Sea trials of the new Borey class nuclear submarine, “Yuriy Dolgorukiy” began last month (June 18, 2009). The new Borei class submarine is designed to carry the new generation Bulava intercontinental, submarine launched ballistic missile (SLBM). Development of the Bulava has run into serious problems, but Moscow seems determined to continue the program, with the first Project 955 submarine scheduled to be deployed in either 2010 or 2011.

However further development of Russia’s failure-prone Bulava ballistic missile could be assigned to another design bureau if the project remains in the works, a Russian military expert said last week. “For 15 years the money [for the project] has been thrown down the drain. I think [work on] the missile will be ultimately given to another firm,” said Anatoly Tsyganok, head of the Moscow-based Military Forecast Center. The missile, which is being developed by the Moscow-based Institute of Thermal Technology (MITT), has had six failures in 11 tests, and the general director of the institute resigned last week over what is believed to be a serious setback in the development of Russia’s top nuclear deterrent.

To show off its “flag” in other areas, hiding its calamity at home, Russia carried out test launches of two RSM-54 Sineva intercontinental ballistic missiles (NATO Codename SSN-23 Skiff ) from two Delta IV class nuclear-powered submarines, located near the North Pole, on July 13-14. What seems strange is that according to reports, US intelligence monitors were unable to detect the presence of Russian strategic submarines in the Arctic before they actually test-launched two ballistic missiles!

The first missile, flying a ballistic path, hit its designated target at the Kura testing grounds on the Kamchatka Peninsula, while the second, fired with a flat trajectory, destroyed a target at the Chizha testing site on the White Sea. The RSM-54 Sineva (NATO designation SS-N-23 Skiff) is a third-generation liquid-propellant intercontinental ballistic missile that entered service with the Russian Navy in July 2007. It can carry four or 10 nuclear warheads, depending on the modification. Russia plans to equip its Delta IV class submarines with at least 100 Sineva missiles.