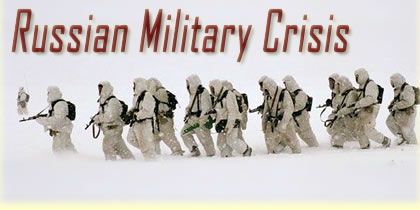 Above: Russian airborne unit in an exercise in Siberia, 2007. Photo: Russian MOD

In a desperate effort to pacify the highly suspicious and perturbed Russian officer corps, President Dmitry Medvedev told high-ranking officers, last week, that the planned parameters of the state military orders will not be changed but remain on its present budget level. But analysts consider Russian President Medvedev likened to a ‘general without an army’, as most top posts are still dominated by Prime Minister Vladimir Putin’s people, who de-facto carry out his policy.

There are some reports, coming from sources close to the President, that Medvedev seems to be gaining some political strength lately. This is probably based on a poll by the independent Levada Center in Moscow, which found that 19 percent of Russians believe that Medvedev actually pursues an independent policy. However this report remained short-lived, as another poll clearly indicated that the president acts entirely under the control of Vladmir Putin and his key entourage. Medvedev has no resources and no team manning key posts to pursue an independent military strategy for the Russian Federation in 2009. Senior military analysts, quoting officials at the Kremlin, claim that Medvedev might chair sessions of the Security Council, but Putin actually controls the siloviki,” meaning the military and security services. And according to latest insider reports – these are still under a deep, if not catastrophic, crisis.

On paper the Kremlin has allocated plans of military orders totaling 1,300 RUB (billion Russian Rubbles), of which 332 billion RUB will be acquisitions of new military hardware. However, analysts estimate that these figures were set before the world economic crisis eradicated such planning all over the world and Russia would not be excluded from this trend. Aging weapons, poor maintenance and ‘rank-and-file officers who don’t want to do anything’ mean the Russian military was on the verge of a ‘catastrophic crisis’ and if forced into action would most probably have to rely on the use of strategic nuclear weapons, which seem to be the only ones still fully operational.

Such a somber assessment came recently not from a junior coop-seeking reporter, but from the top itself, none other that Russian Chief of the General Staff and First Deputy Defense Minister Army-General Nikolai Makarov. (left photo) The General warned, among others, that the Russian air force is not procuring sufficient numbers of new modern aircraft and has fewer servicable aircraft, manned by insufficiently combat-trained pilots, which are incapable of conducting modern era combat operations.

In charge of training and the wide-scale military reform plan, initially conceived by then President Vladimir Putin personally, General Makarov, now under full strain of the present crisis, has sought to discharge hundreds of thousands of, what he believes to be, redundant senior officers. However, the effort immediately met with strong political opposition, particularly from a special Duma, or parliamentary, working group committee. Indeed, Putin’s ambitious agenda for military reform, announced officially in October 2008 by then Defense Minister Serduykov  is already facing countless revisions and delays due to the growing global financial crisis, which is hitting Russian economy hard.

The original fiscal planning envisaged spending one trillion rubles (about $30 billion) in 2009 rising to four trillion rubles ($121 billion) by 2011. This budget was necessary to restart military equipment production to modernize the Russian armed forces. Under the new financial constraints such figures must remain within the realm of ‘wishful thinking’.

Hardest hit already, are large sectors within Russia’s defense industry. The sense of growing crisis is noticeably deepening, as reports increase about the number of companies struggling to survive under the current economic climate. Especially hard hit are the companies that already struggle for export sales in a highly competitive international marketplace.

Within the regular army the crisis is becoming even more noticeable. The ground forces command planned to disband 23 all-arms divisions and 12 all-arms brigades, to be reformed into 39 combat-ready ‘all-arms brigades’, resulting in a considerable manpower cut and leaner, more efficient organization. However, without a wide-scale modernization and comprehensive training, such reforms will have little operational effect.

An example of this dilemma could illustrate the present state of Russia’s tank crisis.

Russia’s is the only army in the world using two types of main battle tank: the T-80 (T-80U) powered by a gas turbine and the diesel-powered T-90 (T-90S). Both have the same weight, size and identical combat characteristics. In addition, the Russian military units still use long obsolete vehicles, such as T-72, T-64, T-62 and even the T-55, some have not been modernized for decades.

Russian tank commanders are longing for the new T-95, an entirely new battle tank, with new running gear, power plant, armaments, fire control, reconnaissance and target identification facilities, promised to undergo final field tests and enter service during 2009, but rumors of the new tank have been circulating for over 15 years. The Kremlin has promised two units, the elite units, Kantemirovskaya and Tamanskaya tank divisions to be equipped by 2010 with the new tanks, but analysts have grave doubts on its implementation.

The present crisis seems far from over and no distinctive change is really in sight. Based on reliable insider assessments, new modern standard weaponry currently accounts for no more than 10 percent of the total inventory, with the first target being to raise this to one third, and only by 2020 should be expected to attain the magical figure of 70 percent! Even optimistic President Medvedev told the Defense Ministry, that large-scale rearmament cannot be expected to commence before 2011.

In order to redress the prevailing gloomy situation, efforts have been made to highlight recent achievements in some of the domains, which can be paraded openly to the skeptic Russian public and the world. Among those placed at the top were the introduction in 2008 of three divisions of mobile missile systems and two silo-based Topol-M launchers which were placed on combat duty, sea trials in Severodvinsk began of the new Yuriy Dolgorukiy nuclear submarine, Russia’s orbital grouping for its armed forces has increased by 14 percent and a modern radar station at Armavir has been developed, using the Voronezh-DM Missile Attack Warning System, Air Defense forces have already been strengthened by another S-400 Triumph surface-to-air missile system. Development of the sea-launched ballistic missile (SLBM), Bulava, has run into serious problems, but Moscow seems determined to continue the program, with the first Borey submarine scheduled to be deployed in either 2010 or 2011.