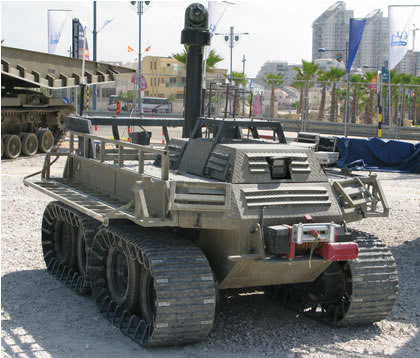 G-NIUS will Develop the Next-Generation Unmanned Ground Vehicle dubbed Nahshon for the Israeli Defense Forces. The new unmanned ground vehicle (UGV) will offer improved operational flexibility and performance beyond the level provided by the current Guardium, designed for security operations and will provide combat support.

The new vehicle will be developed by G-NIUS Unmanned Ground Systems (UGS) Ltd., a joint venture of Elbit Systems and Israel Aerospace Industries (IAI). The company announced today (September 2, 2009) that it was awarded a contract for the development of the next-generation UGV (unmanned ground vehicle) for the Israeli Defense Forces. The development phase, led by the Israeli Ministry of Defense’s Directorate for Defense Research & Development (DDR&D) and the Israeli Ground Forces, is to be completed by 2011.

The “Nahshon” UGV is based on the vast experience of the G-NIUS UGV Guardium, operated by the IDF since 2008. The next-generation UGV will offer improved autonomous mobility and operational performance. Additionally, the vehicle’s navigation capabilities will be enhanced to include advanced control solutions. The new UGV will allow increased payload weight, in order to offer better situational awareness, autonomy and independent decision making. The features of the new UGV will enable higher operational flexibility extending the current performance into more challenging combat scenarios, providing combat support. The IDF has already fielded remotely controlled weapon stations and the armed unmanned platform seems a logical evolution of such capabilities.

The Nahshon is believed to be based on the Tactical, Amphibious Ground Support System (TAGS) developed and produced by Dumur Industries of Canada. This vehicle was extensively tested and evaluated by the IDF including fire support and combat service support (known as the Phoenix unmanned resupply vehicle).

G-NIUS CEO Erez Peled noted that the decision of the Israeli Defense Forces to develop a next-generation UGV reflects the necessity for such a system and its major contribution to security missions in the modern combat arena. Peled added that the Israeli Defense Forces is one of the most advanced armies worldwide in the unmanned systems field, and trusts that other armed forces around the world will follow the IDF in its selection of G-NIUS’ unmanned systems.