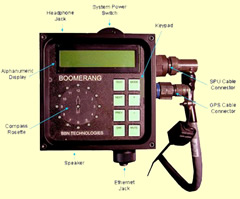 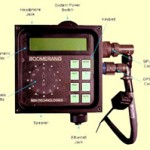 Boomerang II acoustic gunshot detection system from BBN Technologies, is designed to operate in, noisy, vehicular environment, such as on the HMMWV. The system can automatically slew weapons or sensors to “close the loop” and rapidly engage the incoming fire with lethal effect. It was designed to integrate with TRAP T-250 remotely controlled weapon mount, the Weapon Watch EO/IR system, and Enhanced Tactical Automated Security System (eTASS) sensor fusion, display and C2 system developed by Northrop Grumman.

BBN is currently developing Boomerang III which will enhance the performance beyond the current system’s capabilities. Over 100 systems are already deployed in Iraq. The U.S. Army has contracted BBN to supply 106 such systems to equip more units.

In September 2009 BBN Technologies has been awarded a $22.5 million contract by the US Army Product Manager Robotics and Unmanned Sensors (PM RUS) to deliver 1,095 Boomerang Shooter Detection Systems and installation kits to equip 2,195 vehicles. The Boomerang system immediately alerts US Forces to incoming hostile fire and pinpoints the location of the enemy shooter. BBN has delivered over 5,000 such systems in 2008, fielding more than 6000 Boomerang systems in Iraq and Afghanistan. According to Mark Sherman, vice president and general manager, Boomerang at BBN Technologies, the company‘s goal is to introduce Boomerang variants to “protect our troops regardless of whether they are in moving vehicles, in fixed positions, on foot, or in the air.” The company has already adapted the Boomerang technology for soldier-wearable and helicopter applications. Initial wearable ‘Boomerang Warrior’ systems have been delivered to the US Army Natick Soldier Research, Development and Engineering Center, and according to BBN, field testing for the helicopter system is successfully underway.