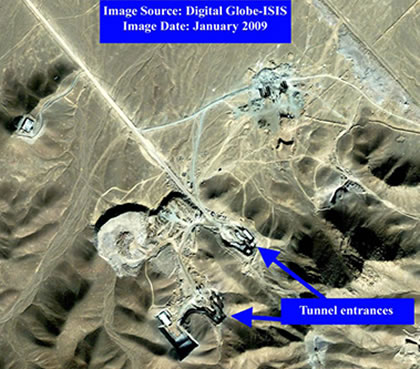 Iran is constructing a second uranium enrichment facility, sofar maintained secret by Tehran. In its message to the International Atomic Energy Agency (IAEA) Iran defines the Tehran site merely as a ‘Pilot Plant’ – but western intelligence experts agree it is ‘well-suited for military purpose’. Apparently, Iran planned to keep the second sites hidden from the IAEA inspections, enabling the new facilities to race forward with high grade enrichment, while the enrichment plant in Natanz continues its slow, low-grade process under the tight control of international inspections. The plant, comprising of two separate facilities located near the holy city of Qom, south-west of Tehran, has been under construction for more than three years. Although the site was managed by the Atomic Energy Organization of Iran (AEOI), it was unknown to all, but the most senior AEOI officials.

Above: One of the new sites spotted outside Qom. For more information: See ISIS website. www.isis-online.org

Western intelligence agencies had already spotted the two sites at military facilities near Qom about three years ago, but maintained silence until more conclusive evidence could be obtained. Both sites are being constructed under cover, hiding the activity from the prowling eyes of the satellites. They comprise underground tunnel complexes and extensive roads and support facilities construction.

One of the new facilities is located at the northeastern annex of the large ammunition storage facility, operated by the Islamic Revolutionary Guard Corps Base. The other, spotted about 40 km east of the first location, obscured by rolling hills, is obscured in an isolated desert area, inside what looks like a military firing range. The work on this site seems more advanced, particularly judging by the large amount of rocks and earth, removed from the tunnels and the subterranean facility. Unlike Natanz, which was constructed on the surface and later covered, the new site is constructed underground from the start.

According to intelligence assessments, the site is intended to hold approximately 3000 centrifuges, a relatively small number for the production of regular fuel reloads for civilian nuclear power plants, requiring a much larger number of centrifuges. In comparison, the Iranian Natanz enrichment facility is sized to provide regular fuel reloads to the Bushehr nuclear power plant and is designed to house 54,000 centrifuges.

The construction of the new site is considered to be in progress, but the enrichment process itself has not yet been activated. Recent intelligence assessments indicated, that earlier this year Iran was installing new infrastructure required for centrifuges. It is assumed that Iran will not be able to begin enriching uranium there before at least 2010.

More articles on this topic: