In 2008 ST Marine was contracted by the Thai government to build a Landing Platform Dock (LPD) vessel for the Royal Thai Navy (RTN). The LPD is a multi-role and multi-purpose ship specifically designed to provide the RTN with a strengthened capability in situations of natural disasters such as floods and tsunamis. The vessel will thus provide support to naval missions such as sea transportation, support operations, civil search and rescue missions, and disaster relief programs. Delivery of the ship is expected by 2012.

The combat system provided by Terma provides the surveillance and identification of air and surface targets, overall combat management system for the vessel and fire control for on-board self-protection weapons. These functions are provided by the company’s C-Search, C-Flex and C-Fire modules. The system enhances situational awareness, manages multiple sensors, monitors and evaluates potential threats. The radar used on the Thai vessels will be the SCANTER 4100 air and surface surveillance radar combined with an IFF system, providing identification to the air tracks of the radar.

The fire control system supports the three guns, a single 76mm and two 30mm cannons mounted on the vessel. C-Fire uses an Electro Optical (EO) Director fitted with a thermal imager, TV camera, and an eye-safe laser range finder. Upon hostile actions encountered by any surface or air target, C-Fire can turn into engagement mode, and the operator can fire any of the ship’s three guns at the target. In case of hostile actions from both a surface and an air target, the system can engage both targets using the SCANTER 4100 radar for tracking the surface target and the EO Director for tracking the air target. 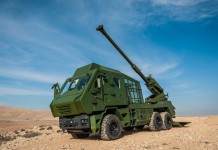 Elbit Systems Debut with a New Variant of ATMOS