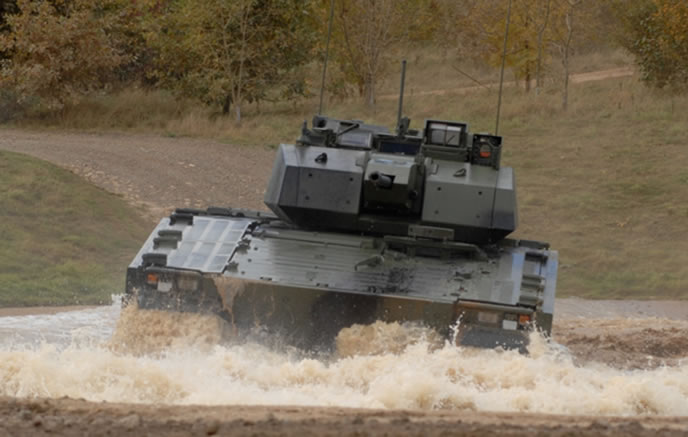 General Dynamics and BAE Systems have both submitted bids to provide the British Army’s next generation of reconnaissance Armoured Fighting Vehicles (AFV). The winner of the £2bn first phase of the Future Rapid Effect System – Specialist Vehicles (FRES SV) vehicle is expected to be announced within 4-5 months, will replace the CVR(T) Scimitar, offering greatly improved protection, firepower and reconnaissance abilities.

In order to meet the tight delivery schedule, using a low-risk manufacturing approach based on proven vehicles, both bidders rely on foreign production facilities to manufacture the chassis – General Dynamics will use its Spanish based ASCOD production line while BAE Systems will utilize its Örnsköldsvik plant in Sweden.

Both vehicles will receive locally built turrets, the GD design selected a turret developed by Lockheed Martin INSYS while BAE system will utilize a turret designed in house. Both will mount the 40mm Case Telescopic cannon, already selected for the Warrior Lethality uplift program, offering superior firepower, having three times the explosive power of the current Rarden 30mm cannon mounted on the Warrior.

The General Dynamics team, led by General Dynamics UK, is offering a low-risk evolution of the Spanish designed ASCOD Infantry Fighting Vehicle, already in use with the Spanish and Austrian armies. GD UK plans to utilize General Dynamics UK’s indigenous Armored Fighting Vehicle integration center, based in South Wales and Gloucestershire for the processing of the vehicles. BAE Systems has also submitted its proposal, based on the latest version of its proven CV90 chassis mated with the MTIP2 turret, also proopsed for the Warrior Lethality Improvement Program (WLIP). For the British design the CV90 chassis has been shortened and given a lower profile. As with the competitor, the BAE System’s proposed vehicle will be mated with the turret at its UK facilities.