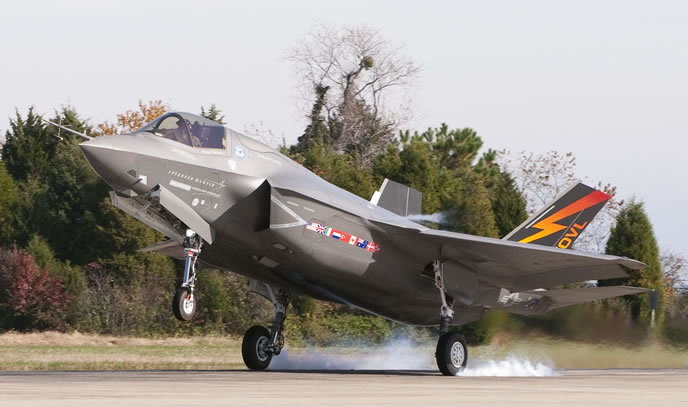 The first optimized conventional takeoff and landing (CTOL) F-35 Lightning II aircraft made its fiest flight on Saturday, Nov. 14, 2009. This aircraft, called AF-1, is the fourth F-35 to begin flight operations. It incorporates many evolutionary improvements and updates derived from the test program of the first F-35 – the AA-1. The aircraft was assembled on the moving production line as the 31 Low Rate Initial Production aircraft now in assembly. The moving assembly line, designed to improve production quality and speed, is the first ever for a modern fighter. During the AF-1 assembly the line achieved the maximum production speed of 50 inches per hour.

Another event in the F-35 program was the transition of the F-35B The first Lockheed Martin F-35B Lightning II short takeoff/vertical landing (STOVL) stealth fighter arrived Sunday at Naval Air Station Patuxent River, Md., where it will conduct its first hovers and vertical landings through 2010. At its new location the aircraft will be supported by the F-35 Autonomic Logistics Information System (ALIS). This aircraft is the first F-35 to be sustained by ALIS – the worldwide support system that will monitor the prognostics and health of F-35s around the globe to ensure mission readiness. The F-35B is intended to replace the AV-8B STOVL fighters, F/A-18 strike fighters and EA-6B electronic attack aircraft in service with the U.S. Marine Corps, as well as the Harrier, and Sea Harrier in service with the Royal Air Force, Royal Navy and the Italian Air Force and Navy.

Facing picture: the System Design and Development test aircraft (SDD) testbed seen in flight with covers of the vertical fans opened. The picture below shows the same position on the aircraft during ground tests. Photos: Lockheed Martin.