BAE Systems, in partnership with the National Oceanic and Atmospheric Administration (NOAA), has completed the first successful test flight of a small, electric-powered Coyote unmanned aircraft system. The system deployed in midair from a 3-foot-long sonobuoy dropped from a P-3 aircraft. The flight, which lasted 49 minutes, marks a significant milestone in the development of the Coyote for military uses and scientific research.

The test flight funded by NOAA, used its WP-3D Orion aircraft, to explore the Coyote’s potential use in weather research. Future testing will assess the system’s suitability to be dropped into a hurricane or tropical storm to measure wind speed and other data critical to forecasting. “Small unmanned aircraft systems are important tools that can help improve our understanding of the environment,” said Lt. Cmdr. Nancy Ash, NOAA manager for the Coyote project. “The Coyote has demonstrated the potential to provide researchers with valuable observations of high-wind environments.” 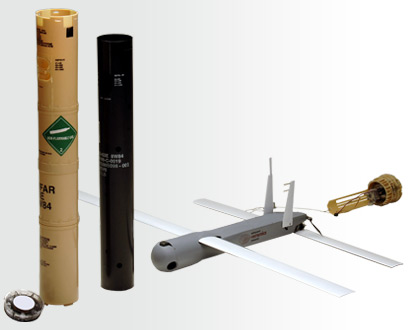 The Coyote, developed by Advanced Ceramic Research, acquired last year by BAE Systems, was originally funded by the U.S. Navy and is currently undergoing certification through Naval Air Systems Command (NAVAIR). The three-foot-long, 58-inch wingspan electrically driven Coyote UAV is designed to be launched from the sonobuoy tube of a US Navy P-3C Orion or a helicopter, such as the SH-60, to provide 90 minutes ISR collection. At 12-14 lbs., the Coyote UAV has a cruising airspeed of 60 knots and dash airspeed of 85 knots being able to be launched and operate at altitudes up to 20,000 ft.

During freefall, the system is designed to emerge from a sonobuoy by a parachute, unfold its X-wings, and begin a directed flight path. Its flight is controlled via line-of-sight radio link (VHF or UHF), as far as 20 miles from the P-3 or helicopter controlling it. Equipped with sensors or cameras, it can perform intelligence, surveillance, and reconnaissance missions while the host aircraft remains in safe airspace.

Coyote is mission programmable from either the tactical officer’s or pilot’s station while still in the launch tube, using the existing tactical station hardware along with proprietary software. Once flying, Coyote follows an autonomous, pre-programmed path with real-time updates. Coyote UAV can carry either an electro-optical (EO) or infrared (IR) camera and data transmitter. The Coyote will support intelligence, surveillance, and reconnaissance (ISR) missions deployed from maritime-patrol aircraft or anti-submarine warfare (ASW) helicopters.