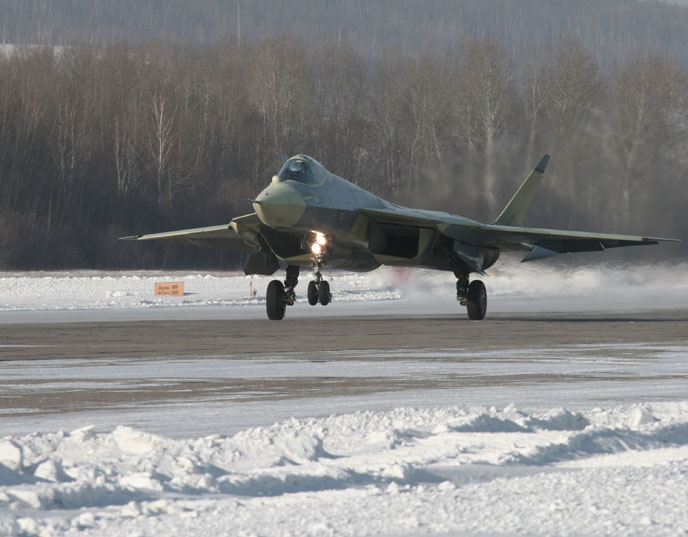 Sukhoi T-50 PAK-FA made a successful 47-minute maiden flight on Friday 29 January 2010, taking off from Komsomolsk-on-Amur Airfield in Russia’s Far East, adjacent to the manufacturer’s site.

The aircraft was flown by Sukhoi test-pilot Sergey Bogdan. Sukhoi, the aircraft designer is expecting to complete flight testing and enter serial manufacturing by 2015, anticipating orders for at least 400 aircraft for the Russian and Indian Air Forces.
The flight went successfully meeting all its assigned tasks. “In the course of the flight we’ve conducted initial evaluation of the aircraft controllability, engine performance and primary systems operation. The aircraft had retracted and extracted the landing gear. The aircraft performed excellent at all flight-test points scheduled for today. It is easy and comfortable to pilot”, – said Sergey Bogdan.

After the initial test flights in Komsomolsk-on-Amur, the next test flight program is planned to take place in the Moscow and Astrakhan regions.
The new fifth generation stealth fighter, known by Project Code Name T-50 PAK-FA (Advanced Tactical Frontline Fighter) is designed to compete with the US stealth fighters such as the Lockheed Martin built F-22 Raptor and F-35 Lightning II.

Russia has been developing its newest fighter since the 1990s. India had joined the program in October 2007 and is expected to share 25% of the development cost. India will also be responsible for modifying the aircraft into a two-seater trainer and special-mission fighter, addressing specific Indian Air Force requirements.

The T-50 is expected to have an endurance of 3.3 hours, and a ferry range of 5,500 km. Its armament consists of new air-to-air and anti-ship missiles in addition to two 30mm cannons. The T-50 is powered by a pair of Saturn 117S engines – these modified AL-31F engines produced by NPO are rated at up to 14.5 ton thrust and are now also powering the new Su-35 multirole fighters.
According to the manufacturer, PAK-FA possesses a number of unique features, compared to previous generation fighters, as it is combining the functionality of both attack aircraft and fighter plane. The 5th generation fighter is equipped with brand-new avionics suite, integrating “electronic pilot” functionality, as well as an advanced phased-array antenna radar. This significantly decreases pilot load, allowing him to focus upon the completion of tactical missions. New aircraft on-board equipment allows real-time data exchange, not only with ground-based control systems, but also within his flight team. According to AviationWeek, the T-50’s avionics suite to be supplied by the Ramenskoye Design Bureau will include six processors and display suite; the full-scale phased-array radar is under development at the Tikhomirov NIIP design bureau.

Composites application and innovative technologies and aerodynamics of the aircraft, are measures applied to decrease the engine signature, providing for an unprecedented small radar cross-section, in optical and infrared range. This significantly improves combat effectiveness against air and ground targets at any time of the day, in both visible and instrument meteorological conditions.

PAK-FA program advances Russian aeronautics, together with allied industries, reaching an entirely new technological level. These aircraft, together with upgraded 4th generation fighters will define Russian Air Force potential for the next decades. “Sukhoi plans to further elaborate on the PAK-FA program, which will involve our Indian partners. I am strongly convinced that our joint project will excel its Western rivals in cost-effectiveness and will not only allow strengthening the defensive power of Russian and Indian Air Forces, but also gain access to a significant share of the world market”, – said Mikhail Pogosyan, Sukhoi Company Director General commenting on the launch of the flight test program.