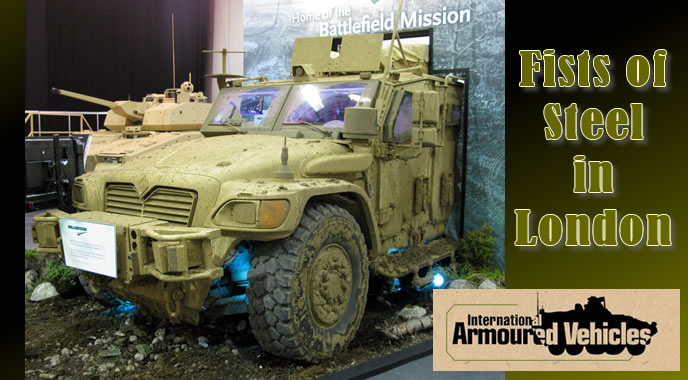 The MRAP All-Terrain Vehicle (M-ATV) made its international debut at the International Armored Vehicles exhibition. The display was in accordance with the Pentagon’s plan to offer MRAP and M-ATV vehicles to allied forces, taking part in the ISAF coalition operations in Afghanistan.

Oshkosh also brought the new SandCat to London; the high-speed, highly-protected, highly-maneuverable vehicle that can be specifically configured to fulfill a variety of roles in any type of mission.  The SandCat is tailored to meet operational environments, giving the perfect balance of mission performance, protection and payload to meet rigorous demands.

Total Mobility Vehicle is unveiling at the International Armored Vehicles a new family of vehicles designed for extreme off-road mobility. Known as the TMV 6x6M, the off-road utility vehicle is the first of a series of such vehicles, designed for military applications. A civil configuration is also in development.

The TMV 6x6M has an armour-clad, fully enclosed “bath tub” hull that houses all major components, offering significantly greater protection from mines and IEDs than conventional vehicles. Additional protection to the crew and passengers is provided by a composite cab and composite rear pod for troop carrying applications. the vehicle is designed to provide high levels of protection against ballistic threats.

The CV-90 Recce – developed by BAE System and proposed as a contender for the British FRES Scout Vehicle program, made its debut at the International Armored vehicles 2010 exhibition.

TMV 6x6M, the off-road utility vehicle is the first of a series of such vehicles, designed for military applications.

Iveco designed the LMV as a light and versatile command and liaison vehicle. The current version is heavier and more protected, adapted to more demanding roles.

Sandcat – originally designed by Plasan, is being marketed by Oshkosh as a command and utility armored vehicle.