A new Israeli all-terrain vehicle is on display at Eurosatory 2010 for the first time. The vehicle, ‘Zibar Mk II’ is the second generation of the Zibar M, an all terrain light vehicle developed by Israel’s top off-road vehicle specialist Ido OffRoad Center (IORC). According to Ido Cohen, owner and chief designer of the vehicle, the company has received significant orders for the vehicle and is gearing to expand its production lines, by teaming with local companies for manufacturing and marketing of the Zibar. At the Eurosatory 2010 exhibition Zibar MkII is displayed at the booth of another Israeli company – Hatechof, which cooperates with IORC on the international marketing. The manufacturing of the vehicles will be done at Israel’s Automotive Industries (AIL) plant in Nazareth, where the Israeli Storm vehicles are produced.

Sofar more than 20 Zibar vehicles are operational. One of the applications currently operational overseas is the Mobile Support Vehicle (MSV) offered by Aeronautics Defense Systems. The MSV takes advantage of Zibar’s extreme mobility, transporting a mast-mounted stabilized multi-sensor payload to locations inaccessible by other vehicles. MSV uses an eight-meter telescopic mast, concealed in the vehicle, carrying the stabilized multi-sensor payload or a scanning thermal imager (SPIDER), both delivered by Controp Precision Systems. Initial production versions of the MSV are operational with some desert patrol unit in Israel and by foreign paramilitary and security organizations. The new model Zibar MkII is slightly larger than the Zibar M and is standardized in several configurations – a standard double-cab, pick-up and long configurations accommodating four to six passengers. Current models are configured for security, VIP and military scout vehicles. The vehicle is designed for a Gross Vehicle Weight of up to four tons, carrying a payload of 1.6 tons. In addition, an armored capsule version is also in the plans, offering B6/B7 protection level against small arms while the high V-shaped hull offers protection from mines and IED blasts. The armored version weighs 4.5 tons, carrying one ton of useful payload. According to Ido Cohen, the armored capsule replaces part of the vehicle’s tubular space frame and rigid roll cage, therefore saving about half a ton of ‘dead weight’ with armored components providing ballistic protection and structural strength. Both versions are fully air-conditioned and are designed to operate efficiently in desert conditions and at very high temperatures.

Breaded at an off road stable, Zibar M was designed to excel in extreme terrain and Zibar MkII is no exception. The vehicle is powered by a GM Vortec 6.2 litre V8 diesel developing 403 braking horse power (BHP) at 5800 RPM, (417 lb/ft torque at 4300 rpm). The engine is mated to a 6 speed automatic gearbox and heavy duty part time transfer case – basically a Cadillac Escalade power train. Active suspensions coil over shock absorbers with dual spring airshock, both taken from the desert racing world, are used for rear and front axles. Using large truck size tires with this small but powerful vehicle renders a platform with extreme performance. According to Ido Cohen, when deflating the 42″ x13.5 R17 tires down to a pressure of 4psi, Zibar MkII has a minimal ground pressure, enabling negotiation of steep dunes or rocks with ease. With approach angle of 90 degrees, and departure angle of 80 degrees, and ground clearance of 370 mm under axles, Zibar MkII can effectively negotiate obstacles, climb rocks, climb steps 0.75 meters high and cross ditches 0.8 meter wide, handle side slopes of 60%. It is also designed to move through thick vegetation in jungle areas, slashing through mud and fording without preparation water obstacles of depths up to 0.85. 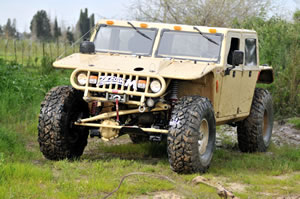 Extremely capable offroad, Zibar MkII also performs like a sports car on the highway. Accelerating from 0 to 100 km/h in seven seconds, it has a top speed of 180 km/h. Fully loaded with combat payload, Zibar MkII can travel over 700 km on a single fuel tank. The same technology used for the Zibar M vehicles is now being implemented for the development of a future all-terrain load carrier for the infantry. This optionally driven vehicle will be capable of hauling over one ton of cargo, enough to sustain an infantry squad in combat. It will have dual front and rear steering, centrally located engine and all-wheel drive, providing warfighters an helicopter-borne support vehicle that will follow them everywhere they go, providing rapid, safe and reliable cargo delivery in any terrain. 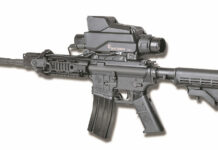