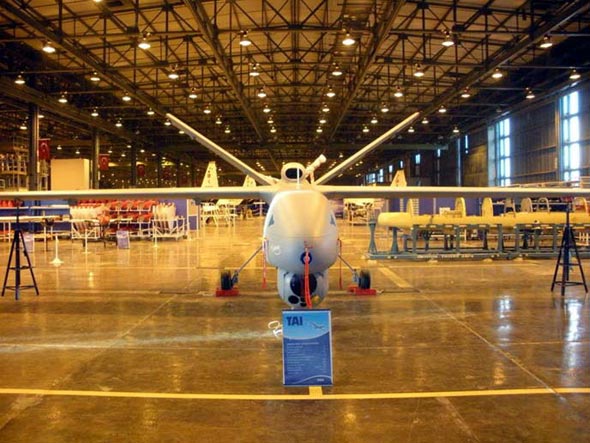 Addressing the growing demand for tactical, medium altitude long endurance (MALE) UAV platforms TAI (Turkish Aerospace Industries) has unveiled its latest UAV called TIHA. The new TIHA weighs 1,500 kg (Maximum takeoff weight) and has a wingspan of 17 meters. Configured to carry multiple payloads weighing up to 250 kg, the TIHA carries 250 kg of fuel, enabling a 24 hour mission missions at an altitude of 30,000 feet. The TIHA will be able to cruising at a speed of 250 knots.

The TIHA system is developed for day and night missions, providing real time image intelligence for surveillance­_as well as detection, identification and tracking of fixed and moving targets.

The airframe of the TIHA is a monocock fuselage built composites and coupled with detachable wing and V-Tail. It is powered by a pusher type piston engine driving a three-blade propeller. In addition to the recce version of the TIHA, the Turkish air force is interested in fielding the TIHA B, a larger version capable of carrying more than twice the payload (3.5 tons). This version, equipped with larger wings (20m wingspan) will be capable of carrying weapons, such as the weapons developed by Roketsan, including the laser guided rockets (CIRIT) and UMTAS Anti-Tank Missiles, both having a range of 8 km.