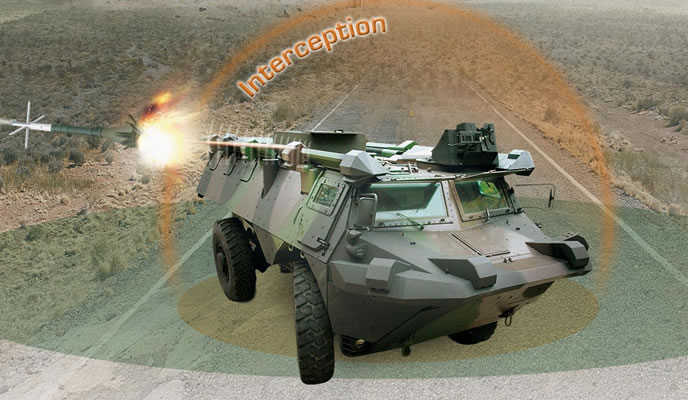 Thales is developing the SHARK (System HARd Kill), an active protection system protecting light and heavy armored vehicles, by using pyrotechnical effectors to defeat incoming threats such as RPG (Rocket Propelled Grenade) and antitank missiles. The SHARK program was launched by the French DGA (Direction Générale pour l’Armement). The program is led by TDA, subsidiary of Thales Group, with the contribution of IBD Deisenroth Engineering, the original developer of this countermeasure system.

The system provides a very light weight alternative solution to passive and reactive armor-plating protection. A combination of radar and optronic sensors detect threats at very short range ensure an effective vehicle protection in urban environment as well as in open field. The pyrotechnical counter-measure is initiated with opto-pyrotechnical device for safe operation. Effective at close range only, the blast created by the pyrotechnical charge reduces dramatically the threat effect, to a level compatible of usual vehicle protection. Destruction of threats at close range from the vehicle also contributes to low risk of collateral effect.

The system covers the vehicle over 360° degrees including higher elevations. The system is designed for very short response rate, protecting against threats launched at very short range (less than 15 m), by focusing riposte energy at their most vulnerable points to significantly reduce collateral effects. This blast effect is initiated by an insensitive munition placed around the vehicle to provide full coverage and overlapping to ensure redundancy and multiple threat engagement capability.

According to Thales, this concept of operation is particularly effective in urban terrain where threats are fired from close range and the risk to non combatant is high. SHARK has been successfully integrated on France’s VAB light armored vehicle. The French administration has validated the SHARK concept through intensive trials.