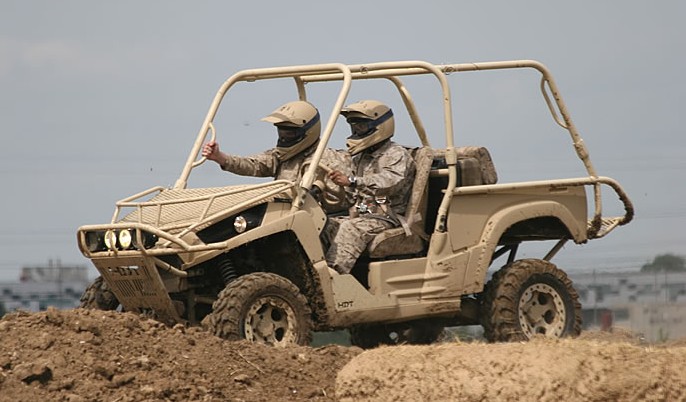 Above: The U-1 diesel ‘quad’ ATV from HDT. Photo: Noam Eshel

Apart from the many armored vehicles at the show, quite a few high performance, all-terrain vehicles also made their first appearance at the show, these include the Sherpa Light from Renault Trucks, Ido Cohe’ns Zibar Mk 2,

displayed by the Israeli company Hatehof and the Quad from HDT. Another vehicle promoted by Raytheon for this market segment is the HydRA, a hybrid electric vehicle offered specifically for covert, special operations. Another twist of the familiar ATV is the unmanned, all-terrain TAGS, making its first appearance as an autonomous combat vehicle, displayed by the Israeli UGV expert G-NIUS.

The Israeli Zibar 4×4 all terrain vehicle made its international debut at Eurosatory 2010. Displayed as part of a vehicle-range brought by Hatehof, the Humvee-sized Zibar offers exceptional all terrain mobility and versatility, as an all terrain vehicle used by special forces, a surveillance and patrol vehicle, It can also be delivered in an armored configuration, operating as an all-terrain logistical support or liaison vehicle, offering military forces the option to move off-road, thus avoiding IED infested roads. A special configuration for VIP has also been delivered.

Another vehicle making an impressive performance at dynamic demonstration was the new ‘Sherpa Light’ family of tactical vehicles from Renault Trucks. The new Sherpa is a13.3 ton, 4×4 transport vehicle designed specifically to support special missions. Carrying five soldiers and up to 2.6 tons of cargo, the new Sherpa provides high mobility light forces, traversing all types of terrain with sufficient payload capacity to support paratroops, marines and light infantry on extended missions. The vehicle is transportable by C-130 and A400M transport aircrafts.

At the dynamic demonstration the U.S. company HDT displayed new diesel powered M2 cross motorcycle and U1 tactical four-wheeled ‘quad tactical support all-terrain vehicle’ both designed for special ops. Both M2 and U1 are powered by a single-cylinder engine – the MAC-C1 advanced multiple heavy fuel engine is compatible with JP8, JP5, JP4, AVTUR, JET-A1, diesel and biodiesel (up to B20). Consequently, these vehicles may use almost any fuel available. According to HDT, the development of the 760cc M1030-M2 engine and motorcycle was purpose-built for military applications.

Other special operations oriented vehicles on display at Eurosatory included the British Jackal from Supacat, along with its newly released protected SPV-400, and the Ocelot, designed from the baseline as a relatively light, highly maneuverable all-terrain armored vehicle. 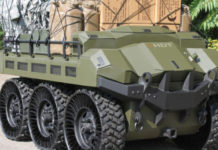 HDT to Deliver 20 Robotic Mules for US Army Evaluation