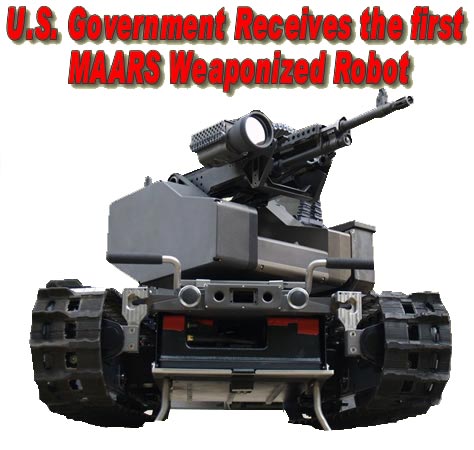 Foster-Miller, a subsidiary of QinetiQ North America shipped the first Modular Advanced Armed Robotic System (MAARS) ground robot to the U.S. military under a contract from the Explosive Ordnance Disposal/Low-Intensity Conflict (EOD/LIC) Program within the Combating Terrorism Technical Support Office (CTTSO). In the coming months the new weaponized robotic system will be tested to ensure full compliance with standards and a safety release for fielding.

“Government has been working with us over the last 18 months to develop and provide an innovative and evolutionary approach to combat situations that address the battlefield of the future,” said Dr. William Ribich, President of the Technology Solutions Group, QinetiQ North America. MAARS, a modular ground robot system was designed as a successor to the combat tested SWORDS weaponized robotic system, based on Foster Miller’s Talon robotic platform. Foster Miller produced over 2,000 Talons, which are extensively used in Iraq and Afghanistan on counter IED and surveillance missions. However, the SWORDS was not used extensively in combat and the lessons learned during initial evaluations contributed to the system definition and refinement of the MAARS system.

Unlike its predecessors, MAARS was designed from the start to employ various lethal and non lethal weapons, to provide measured response capability at stand-off distance, contributing to warfighter’s safety and tactical flexibility. The system employs a uni-body chassis with a plug-and-play design, allowing rapid reconfiguration in the field, employing a range of sensors, effectors and weapon systems. Among the system’s non-lethal means is the ability to project the operator’s voice through mounted loudspeakers, or alternatively to activate pulsed eye-safe green laser dazzler to disorientate and incapacitate people. MAARS also has the capability to launch 40mm less-lethal ammunition, such as bean bags, smoke, star clusters, pepper spray and ‘flash-bang’ non-lethal grenades. Optional lethal weapons which can be carried by the robot include 40mm high-explosive grenades or M240B 7.62 medium machine gun.

MAARS comes with tracks that can traverse all terrains, including stairs, and it is also capable of using wheels to increase speed and further reduce noise. The robot’s turret system is able to support a drop-in manipulator arm, multiple types of weapons and a wide range of sensor packages. Additional features include up to seven cameras with multi-modal capabilities. In the MAARS weapons-configured system, the operator always sees where the weapon is pointed in relation to himself and other friendly forces.