A new face at the Paris Air Show 2011 is UVision, a small company from Israel, specializing in special purpose UAVs. The highlights of the company’s display is the WASP personal, mini UAV that has performance characteristics of a missile, with the versatility, user control and reusability of a UAV.

UVision has built the WASP as a back-packable, canister-launched system, weighing about three kilograms, including the UAV, payload and launch tube. The mini UAV has a 80 mm diameter cylindrical shape with two foldable, cruciform wing sets, developing ‘extreme manueverability’ to overcome weather and terrain constraints. The manufacturer mentions the WASP is launched pneumatically from the canister using custom designed mini launcher, but does not mention a retrieval mechanism, alluding to the mini-drone’s “reusable, yet priced to be expendable” characteristics.
The aerodynamic design also provides for high agility and precision flight not often associated with UAV designed. The UAV has unique operating modes, from very high dash speed over 100 knots, to low speed below 60 knots.

The WASP is equipped with specially developed EO sensor comprising a two-axis stabilized CCD color sensor or uncooled thermal sensor and automatic tracker. It also has a dual dataling, with separate chanels for control uplink and sensor downlink. The mission radius is up to five kilometers.

WASP has a payload capacity of up to 1 kg, but the designers delivered an EO payload that weighs only 115 grams (180 gr. for the thermal payload), leaving enough volume and weight for additional storage. Employing low cost avionics and payload, and powered by primary batteries, WASP was designed from baseline to be a low cost and expendable system.

WASP is designed as a compact system, the fuselage length is 700 mm; it is attached to folding wings, opening to a 670mm span, this mini UAV is easily carried and operated by the warfighter. 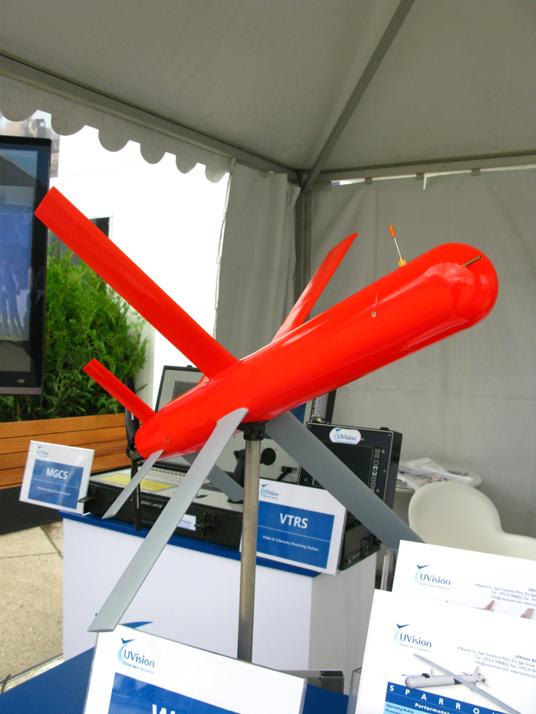