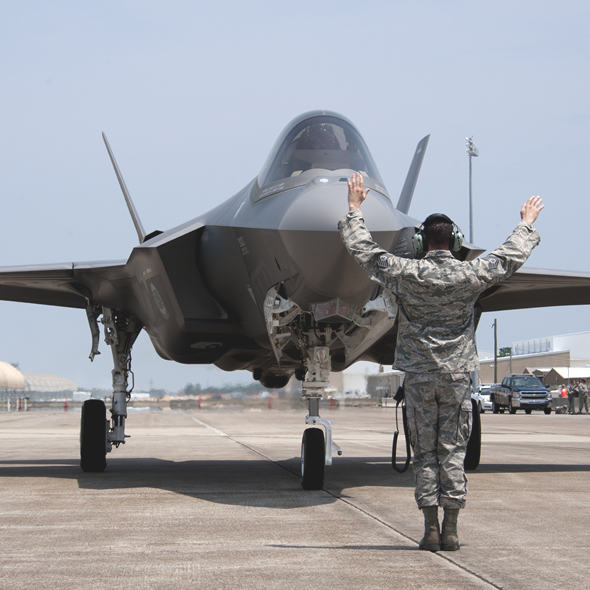 The first pair of production Lightning II aircraft deployed this week to join the 33rd Fighter Wing at Eglin Air Force Base in Florida. The aircraft, known as AF-9 and AF-8, will be used to assist training F-35 pilots and maintainers who begin coursework at the base’s new F-35 Integrated Training Center this fall. Over the lifetime of the program, a total of 59 F-35s will compose the fighter fleet at Eglin AFB.

The two aircraft are the third and fourth production aircraft of the F-35 family. Both are the conventional takeoff and landing (CTOL) ‘A’ versions of the Lightning II. Overall, the jet is the third production-model F-35 delivered to the U.S. Air Force, with the first two assigned to Edwards AFB, Calif. It is the first aircraft delivered from Low Rate Initial Production lot two and the seventh F-35 delivered in program history to the Air Force.

Located at Eglin AFB, the fully-integrated F-35 pilot-and-maintenance training center includes pilot and maintenance training equipment, support, systems and facilities for all three aircraft variants. The center will be home to a full spectrum of the latest courseware, electronic classrooms, simulators and flight events ensuring superior training for the next generation of pilots and maintainers. Another base preparing for the F-35 deployment next year is the Nellis AFB near the city of las Vegas, in Nevada. The Air Force plans to deploy 36 F-35 fighter aircraft at the base, starting 2012 through 2020 supporting the Force Development Evaluation and Weapons School programs.

The F-35A CTOL variant – designed to meet U.S. Air Force requirements – is also the primary export version of the Lightning II. This model will serve with the U.S. Air Force and with most foreign air forces, including Italy, the Netherlands, Turkey, Canada, Australia, Denmark, Norway and Israel.

To date, the three versions being tested with the F-35 program have accomplished more than 925 flights since late 2006. The latest addition to the test fleet was the fifth F-35B Short Take Off/Vertical Landing (STOVL) flight test aircraft, delivered to the Marine Corps on Saturday this week. The aircraft is joining the the test fleet conducted by the U.S. Navy and Marine Corps at Naval Air Station (NAS) Patuxent River, Md. The carrier variant aircraft CF-2 began performing Jet Blast Deflector (JBD) tests at Joint Base McGuire-Dix-Lakehurst in New Jersey. JBD testing is one portion of the tests required to ensure the F-35C is compatible aboard the aircraft carrier. Testing continues with varying distances between the aircraft and JBD, and at power settings up to and including maximum afterburner power.