The Boeing F/A-18E/F Super Hornet Infrared Search and Track (IRST) program has been authorized to proceed to the engineering and manufacturing development phase, clearing Milestone B Acquisition Decision Memorandum from the U.S. Navy last week. The pod-mounted IRST system is developed for the Boeing Super Hornet by Lockheed Martin’s Missiles and Fire Control business unit.

Housed at the tip of the centerline fuel tank, the F/-18E/F IRST employs a passive, long-range infrared sensor that searches for and detects infrared emissions over a wide field of regard. The system can simultaneously track multiple targets and provide a highly effective air-to-air targeting capability, even when encountering advanced threats equipped with radar-jamming technology.

The system enables the pilot to detect, discriminate targets and initiate engagement of hostile targets from extended range, using only passive means, therefore denying the enemy an early warning of such action. The system’s high-angle accuracy also provides the ability to track closely-spaced targets at maximum ranges. The high resolution characteristics of IRST provide dramatically improved raid cell count (40 times more accurate than radar) at maximum declaration ranges – information that can be used stand alone for threat assessment or be fused with other sensor data to enhance situational awareness, ensuring first-to-see, first-to-shoot capability.

“In air-to-air engagements, IRST provides a discriminating capability to counter threats at greater standoff distances enhancing survivability,” said Paul Hey, IRST senior program manager in Lockheed Martin’s Missiles and Fire Control business. “The successful Milestone B achievement sets the foundation for delivering IRST capability to the warfighter, and is a testament to the hard work and collaboration of the U.S. Navy and industry team.”

According to the manufacturer data, the IRST scan volume is comparable to radar, with selectable scan volumes in azimuth and elevation. It can operate in either track-while-scan or single-target-track modes. Additionally, IRST provides autonomous, passive range on targets to develop a weapon-quality solution, as well as track data to enhance target engagement. “The IRST sensor system will expand Super Hornet detection and targeting capability in multiple mission profiles, including electronically denied environments,” explains Tim Adrian, Boeing F/A-18E/F IRST program manager. The system will also offer advantages as a stand-in sensor detecting ballistic missiles ascending through their boost phase, offering other ballistic missile defense assets an early warning on such missile attacks.

“The F/A-18E/F features a balanced approach to combat survivability and lethality, employing a variety of onboard sensors that provide aircrews with unmatched situational awareness. The new IRST system will continue to expand the Super Hornet’s advanced capability.”

IRST subsystems include the Long-Wave Infra-Red (LWIR) sensor head with a three-axis inertially stabilized gimbal unit that scans the optics and detector assembly, a COTS processor that hosts the algorithms and a high density digital recorder.

The IRST is compact enough to be mounted in various locations, from a conformal fuselage mount to a pylon. Lockheed Martin, The Boeing Company, and the U.S. Air Force are also developing a different IRST pod for the F-15C, which will be transportable across a wide range of platforms. Program members include the Boeing Company the aircraft manufacturer and system integrator, Lockheed martin developing the sensor, GE Aviation [NYSE: GE], delivering the container pod and assembly, and Meggitt Defense Systems Inc providing the power and cooling systems. Lockheed Martin is currently subcontracted to the Boeing Company to supply IRST sensor systems in support of the U.S. Navy F/A-18E/F and U.S. Air Force F-15C IRST programs. In November 2011 Boeing received a $135 million contract by the U.S. Navy, to develop an IRST solution for the F/A-18E/F, to be operational by 2016.

The company maintains an active IRST production line, supporting international variants of the F-15. Among these customers are the Royal Saudi Arabian Air Force, which opted to include the AN/AAS-42 on its latest F-15SA; AN/AAS-42 is an earlier generation of the IRST being developed for the Super Hornet. It was developed and employed with the the U.S. Navy F-14D Tomcat swing-wing fighters aboard U.S. carriers. The AN/AAS-42 has accumulated over 200,000 flight hours with the Tomcats. 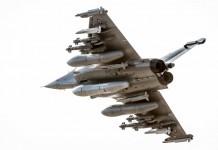