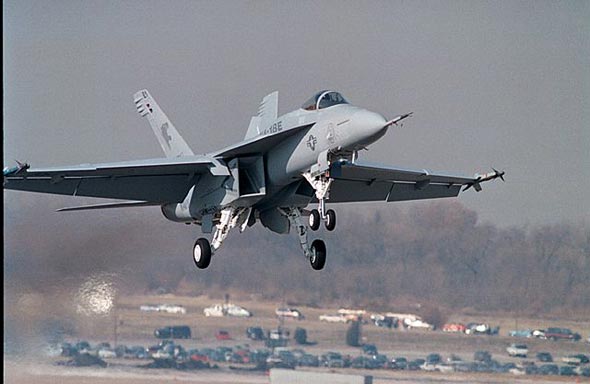 The latest version of the F/A-18 – the F model (Super Hornet). Two versions are currently in production – the single-seat E model and the two-seat F model. This carrier capable aircraft provides a versatile platform for a wide range of missions, including air superiority, day/night strike with precision-guided weapons, fighter escort, close air support, suppression of enemy air defense, maritime strike, reconnaissance, forward air control and tanker. The aircraft is currently in production for the US Navy and the Australian Air Force.

Apart from a pair of powerful GE F414-GE400 engines, producing a combined 44,000 pounds of thrust, the Super Hornet utilizes more advanced aerodynamic design giving it exceptional combat maneuverability, an unlimited angle of attack, high resistance to spins and departures and ease of handling and training. The aircraft uses reconfigurable digital flight control system can detect damage to or full loss of a flight control and still allow safe recovery. Increased airflow to the engine is provided through the Super Hornet’s large, distinctively shaped inlets. A full authority digital electronics control (FADEC) allows for unrestricted engine response in any phase of flight.

One of the aircraft most significant improvements is its APG-79 Active Electronically Scanned Array (AESA) radar produced by Raytheon. This radar is scheduled to become operational with VFA-213 in 2008. By that time, Block II Super Hornet is expected to become the first production aircraft to roll out of the assembly line, equipped with the new-generation air/air and air/ground radar. This agile radar will be able to track twice as many targets as current systems, detect targets at longer range, provide high-resolution synthetic aperture radar (SAR) mapping at long stand-off range, while simultaneously perform air-to-air search, target tracking or and air-to-ground missions.

Optimized for low radar cross-section the radar contributes to the aircraft stealthiness, as well as protection against hostile radars, by complementing the electronic warfare suite. Other recently incorporated upgrades include the introduction of the advanced targeting forward looking infrared (ATFLIR) and joint-helmet mounted cueing system (JHMCS). The Multifunctional Information Distribution System (MIDS) datalink system is also added, in addition to advanced displays and computers. Additional work is currently underway with the development of the aircraft Infrared Search and Track (IRST), developed by Lockheed Martin’s Missiles and Fire Control division. The aircraft will be able to fuse data from the AESA, IRST, ALR-67(V)3 digitally cued radar-warning receiver and off board information, to create high level situational picture.

Unlike other IRST systems installed in front of the cockpit on the upper fuselage, the Super Hornet’s IRST will be installed on a 480 gallon fuel tank, which will contain more than 330 gallons of fuel in addition to providing the IRST capability. First production deliveries are planned for 2012, with initial operational capability (IOC) anticipated in 2013. Boeing expects to receive the initial IRST development contract from the Navy in the summer of 2008. The total contract value is expected to exceed $500 million through the development and production phases of the program.
The first production model Super Hornet was delivered to the U.S. Navy in December 1998. In April 2005, Boeing delivered the first Super Hornet Block II, complete with AESA radar. As of January 2007, 300 Super Hornets have been delivered.

Boeing IDS is hopeful the aircraft will find future markets, especially in those countries currently flying the F/A-18 Hornet, such as Finland, Switzerland, Malaysia and Kuwait. Other prospective markets include Japan and India.