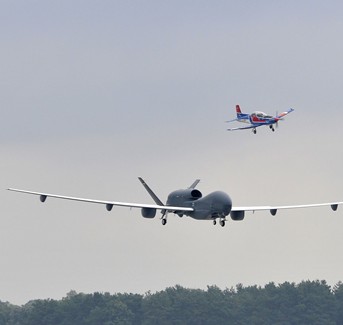 The first high-altitude, long-endurance (HALE) Euro Hawk Signals Intelligence (SIGINT) unmanned aircraft platform has landed today in Manching Air Base, southern Germany. The unmanned aircraft flew directly from Edwards Air Force Base, Calif., landing in Germany after a 23 hour flight. On a typical mission the Euro Hawk has an endurance of 30 hours, flying at a maximum altitude of more than 60,000 feet.

The aircraft will soon be fitted with the European made mission systems developed by EADS Deutschland GmbH (Cassidian) and integrated in Manching, Germany. Delivery of the first Euro Hawk demonstrator to the Bundeswehr is scheduled for mid-2012, with four follow-on systems scheduled tentatively between 2015 and 2017.

“Soon, the Bundeswehr will be able to independently cover their needs for SIGINT data collection and analysis, thus contributing to NATO, European Union and United Nations operations,” said Neset Tükenmez, chief executive officer, EuroHawk GmbH. “Euro Hawk will also serve as a working model for other programs and countries.”

Euro Hawk is an interoperable, modular and cost-effective replacement to the fleet of manned Breguet Atlantic aircraft which was in service since 1972 and retired in 2010. The system represents the first international version of the RQ-4 and the first HALE SIGINT UAS in Europe. Another platform based on the RQ-4 to be deployed by NATO is the airborne segment of NATO’s AGS.