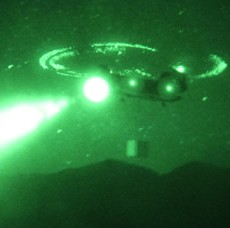 A CH-47 Chinook helicopter downed by Taliban RPG fire in Eastern Afghanistan on Monday. The helicopter was hit by an RPG fired by Taliban, as it was descending, approaching to land at ‘Camp Joyce’ Forward Operating Base (FOB) in Eastern Afghanistan. According to the Start and Stripes, The helicopter was carrying about 20 U.S. and Afghan troops, two suffered minor injuries from shrapnel. The helicopter was hit shortly after midnight, when the rocket hit the rear of the helicopter on its descent into Nangalam Base in the Pech River Valley of Kunar province. A rescue team that responded to the crash came under small-arms fire, drawing return fire from U.S. and Afghan soldiers. No further coalition casualties were reported. In a statement released by the ‘Voice of Jihad’, the Taliban claimed credit for the shoot down, and said two of their fighters were killed during the operation. The Taliban announcement said its fighters “shot off rocket propelled grenades from a close distance to bring down the enemy helicopter last night at approximately 1:00 am local time”. The Pech River Valley and several adjoining valleys, including the Korengal and Shuryak, are considered Taliban strongholds. (For further insight on the situation read Bill Roggio, article in the Long War Journal‘.

Chinook helicopters operated by the U.S, Canadian, Australian, British, Dutch forces in Afghanistan have suffered heavy losses in Afghanistan since the first deployment of coalition forces in the country in 2002. Considered a highly reliable workhorse, crashes involving the Chinooks have often resulted from enemy fire – man-portable anti-aircraft missiles, small arms and rocket propelled grenades (RPGs). (see our 2007 news analysis, posted by Col. David Eshel) To protect the helicopter from small arms fire all Chinooks has undergone extensive up-armoring, comprising installation of armor plates protecting sensitive elements, cockpit and cargo compartment. In addition, electronic countermeasures systems were installed, providing early warning on imminent missile attacks, triggering the activation defensive measures to divert guided missiles. However, large targets such as the Chinook remain vulnerable to the the RPG, an unguided weapon that can be fired from distances of few hundred meters. While the RPG can hit a target from up to 900 meter range, even at 500 a direct hit is considered a ‘lucky shot’.

In Afghanistan, insurgents try ambushing helicopters as they descend for landing at known landing zones (such as those adjacent to FOB) or on takeoff, particularly when flying over elevated terrain, which maximizes their vulnerability to such attacks. Protecting helicopters under these circumstances require the FOB to maintain peripheral security prior to the planned arrival of helicopters. According to the Stars and Stripes, the base at Nangalam, formerly known as ‘Forward Operating Base Blessing’ was handed over to Afghan forces earlier this year.