IMI is unveiling two new 125mm tank rounds at the Defexpo 2012 this week. The new types of ammunition can enhance the combat capabilities and survivability of the Indian T-90S and T-72M Main Battle Tanks, improving their armor penetration capability as well as efficiency against anti-tank teams and fortified targets. The new multi-purpose tank round is based on IMI’s Multi-Purpose round technology that has won the 2011 Israel Defense Award. This technology has now been ported to the 125mm caliber, to make it available for the Indian Army.

The M710 is optimized to defeat targets typically encountered in asymmetric and urban scenarios, including buildings and bunkers, light armored vehicles and fortifications. This round is also effective against Anti-Tank (AT) squads and infantry in the open, in a foxhole or behind a corner.

M710 uses an electronic fuzing system that has three different modes of operation: PDD (Point Detonation Delayed), PD (Point Detonation/ Super Quick) and Air Burst. The tank’s Fire Control System (FCS) feeds the target information and the programmable electronic fuze is set by wireless data link while the round is in the chamber.

In PDD mode, the M710 is designed to penetrate and explode inside targets, such as double reinforced concrete walls; bunkers field fortifications or Light Armored Vehicles (LAVs). In PD (Super Quick) mode the round breaches a hole in double reinforced concrete walls, creating a passageway for infantry soldiers. The Air Burst mode is used for effectively engaging AT or infantry squads, operating in the open or hiding behind defilade and walls.

Another newly developed tank round is the 125mm MK-2 Armor Piercing, fin Stabilized, Discarding Sabot-Tracer (APFSDS-T) – a second-generation, high-velocity, Kinetic Energy (KE) armor defeating round. The MK-2 improves the accuracy of the penetrator at all combat ranges, lowers barrel wear and enhances armor penetration capability when fired with existing 125 barrels. The round contains a tungsten-based alloy penetrator and is also type classified for the 125mm smoothbore tank guns.

IMI’s MP rounds family also includes the M117/1, designed for the 105mm rifled guns of the M-60 and Merkava Mk 1 & 2 tanks. The combat proven M329 was later developed for the modern 120mm smoothbore gun used with current Merkava Mk 3 & Mk 4. M329 is also compatible with NATO 120mm smoothbore tank guns. An additional MP round, the M339, has been developed primarily for western tanks using NATO 120mm smoothbore guns, such as the M1A1, Ariete, Leopard 2 or Arjun. IMI’s MP capabilities have been awarded recognition as its M329 tank round has recently received the 2011 ISRAEL DEFENSE AWARD for its distinctive contribution to the defense of Israel.

IMI is participating at the defense show despite its recent inclusion among six companies blacklisted by the Ministry of Defense. 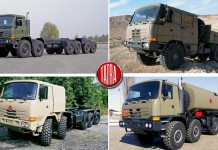