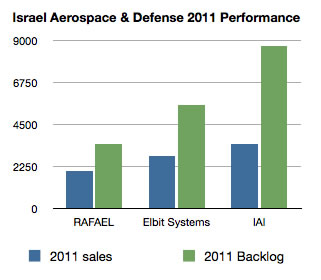 The financial reports published in the recent week by Israel’s top three defense companies reflect a solid year in defense business, despite the slow-down in global economy and the ‘soft’ European market. The combined sales of IAI, Elbit Systems and Rafael Advanced Defense Systems to the defense market were $7.296 Billion, representing 6% growth over the combined sales of $6,871 in 2010.

The total backlog accumulated by Israel’s top three companies has exceeded $17 billion at the end of last year, securing almost two years of operation. Both IAI and Elbit Systems were hit by the cancellation of a sale of an advanced intelligence gathering system to Turkey, following the decision of Israel’s Ministry of Defense to block the delivery of certain sensitive technologies to Ankara. The decision caused both companies to withdraw about $150 million from their fourth quarter books and backlogs. 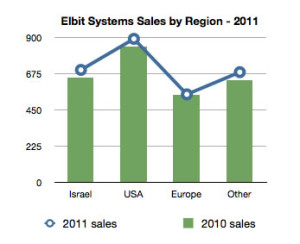 Elbit Systems remains the largest defense company in Israel, reporting $2,817 in sales in the past year, followed by IAI, reporting $2.5 billion in defense sales and RAFAEL in third place, with $1,979 million in sales for 2011. With commercial aviation activity added to IAI’s report, the company is still positioned as Israel’s largest Aerospace & Defense group, with sales of $3,436 million in 2011, up from 3,148 in the previous year.

In terms of net profit, RAFAEL is surprisingly positioned well ahead, reporting $111 million for 2011. This profit was $70 million lower than 2010, which included RAFAEL’s share of the sale of an affiliated non-defense company. The net profit of publicly traded Elbit Systems was $90 million – slashed by half compared to 2010, with IAI’s net profit reported at $83 million, slightly lower the $94 million reported in 2010. 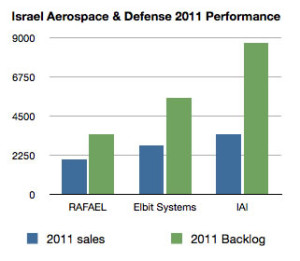 The backlog reported by the companies shows a modest increase, despite the slow down in the world market. IAI’s order backlog includes aviation and defense related contract amounting to $8.7 billion, 87% of which relate to export orders. Rafael, reported an order backlog of $3,465 million, including over one billion US$ in domestic orders. Rafael is relying increasingly on domestic contracts delivering the Iron Dome counter-rocket systems, Trophy active protection systems and various guided weapons to Israel Defense Forces. Elbit Systems also reported an increase in backlog, $5,528 million, compared to $5,446 in 2010. About $1.3 billion of Elbit Systems order book represent business received in Israel.