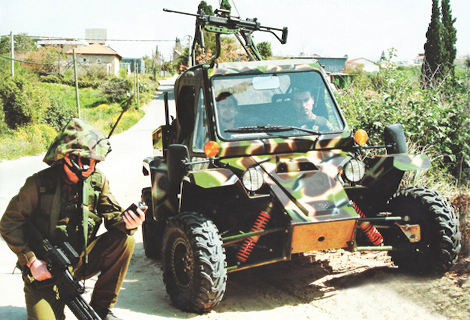 The Indian Maini Group acquired a majority stake in TOMCAR, a company based in Israel engaged in design and manufacture of high performance off road vehicles. At Defexpo 2012 the Indian automotive group is launching the TOMCAR in India. “With the Indian Defence, Paramilitary and Homeland Security scouting aggressively for All Terrain Vehicles, we intend to promote TOMCAR amongst them as part of their modernization drive.” Said Sandeep Maini, Chairman of Maini Group. The Maini Group has created a manufacturing facility in Bangalore to cater for both domestic and overseas customers.

Designed in Israel and built in Israel and the USA, TOMCAR is a military grade, high-performance all-terrain vehicle designed for military, order patrol and first responder use. TOMCAR is deployed by the Israeli Military, the US Customs and Border Patrol and supports the British Army in Afghanistan as a combat support and replenishment vehicle. The Israeli military has also deployed the vehicle on border patrol missions, in an unmanned configuration known as Guardium.

TOMCAR has been customized for special operations, recce and surveillance, military and border forces. In the light strike version TOMCAR can carry Heavy Machine Gun, Anti-Tank guided missile launcher, or Automatic Grenade Launcher. It can also be fitted with a winch for self-recovery. TOMCAR has an option of being customized for both armored and unmanned versions. The vehicle is also air transportable and para-droppable.

The Maini Group is engaged in high precision and innovative engineering products for the last four decades and has a strong presence in diverse industry segments. Core capabilities of Maini Group include high precision components for Aerospace and Automative applications, Materials Handling Equipments, Electric Buggies for People and Cargo Movement, Storage and Shelving Systems and Plastics and Composites.