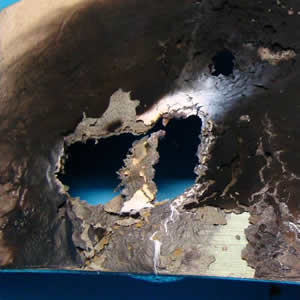 Gamma used a “slab” architecture to deliver 13.3 kilowatts for a number of shots over a total of 1.5 hours. According to Northrop grumman, the system demonstrated stable performance and a beam quality that exceeded design goals, completing the initial phase of the trials.

The tests, conducted in the company’s Redondo Beach laboratory, demonstrated that the laser could burn through the skin and critical components of a target drone used to simulate anti-ship cruise missile threats to U.S. Navy ships. The term “slab laser” refers to a class of high-power, solid-state lasers with a gain medium, or source of atoms that emit light, in the form of a slab about the size of a microscope slide.

The Gamma demonstrator is a single building block (chain) to be combined with other chains to create laser systems of greater power, as was demonstrated in Northrop Grumman’s 105 kilowatt Joint High Power Solid State Laser, which claimed a world record for soli-state laser power in 2009. “The Gamma has equaled or exceeded the performance we achieved in previous slab lasers, but the real advancement here is in packaging and ruggedization for operations in real-world military platforms,” said Steve Hixson, vice president of advanced concepts, space and directed energy systems for Northrop Grumman’s Aerospace Systems sector.

Dan Wildt, vice president, directed energy systems at the company said The Gamma demonstrator is built in a form factor that implements the size and weight reduction goals of the FIRESTRIKE design. The finished Gamma based laser chain weighs about 500 pounds (226 kg) and shrinks to a volume of ‘about the size of two countertop microwave ovens’ (23 inches by 40 inches by 12 inches or 58x101x30 cm). “This laser has also been ruggedized to demonstrate how robust operational FIRESTRIKE lasers can be,” Wildt said. “Gamma implements a significant reduction in the number of internal optical components, while new mounting techniques eliminate sensitivity to vibrations. Key portions of the Gamma laser have already been subjected to vibration, shock and thermal testing to validate that these improvements have achieved design goals,” said Wildt.

According to Wildt, these lasers can be combined coherently, meaning they retain their good beam quality, or the ability to focus energy at long ranges, even as more power is added. “The Gamma laser was tested at a beam quality of 1.4, which beat the design goal of 1.5, and we expect it to keep improving. A perfect beam quality is 1. Owing to its excellent beam quality, the 13.3 kilowatt Gamma is also brighter than its design goal, meaning it can put more power on target at range.” Wildt explained.

The combination of beam quality, power and brightness yields the lethality effect in speed and depth burn through effect demonstrated by the laser. The lethality testing used a single Gamma chain at short distance in a way that simulated the effects that a laser weapon of several chains aboard a Navy ship could achieve at a range of several miles. “We validated that the laser could produce the amount of energy we predicted, and that the energy would have the effect on the target that we predicted,” said Wildt. The components used in the test included the skin of a surplus BQM-74 drone and other parts configured to represent critical internal components. The BQM-74 was formerly produced by Northrop Grumman for the Navy as a representative cruise missile threat and used for testing defensive systems.