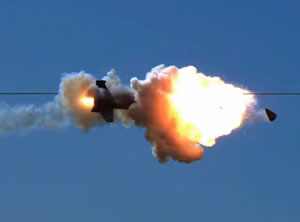 The Lockheed Martin Area Defense Anti-munitions (ADAM) prototype laser weapon system successfully destroys a rocket target flying on a wire at a range of 1.6 kilometers on Dec. 10, 2012, replicating similar demonstrations conducted earlier this year. Defense-Update reports. Since August, the system has successfully engaged an unmanned aerial system target in flight at a range of approximately 1.5 kilometers (0.9 miles) and has destroyed four small-caliber rocket targets in simulated flight at a range of approximately 2 kilometers (1.2 miles). Acquisition, tracking and destruction of the target took approximately three seconds.

Lockheed Martin’s Area Defense Anti-Munitions (ADAM) system is a laser weapon system that is designed to defeat close-in improvised rocket and unmanned aerial system (UAS) threats. The system is self-contained to conduct the full engagement sequence against rockets and accepts an initial external radar cue to engage UASs.  The system uses a 10-kilowatt fiber-laser developped by the company to provide the performance needed for these types of threats. The system precisely tracks targets in cluttered optical environments and has a tracking range of more than 5 kilometers (3.1 miles). It can as a standalone system and to engage unmanned aerial systems with an external radar cue.

ADAM detects the threat and within seconds, locks on the target and establishes an aim point. When the system declares a valid aim point, it fires the laser on the target, long enough to negate the rocket or UAS. Lockheed Martin has successfully demonstrated the ADAM system in a series of tests against representative airborne targets in 2012.

Lockheed Martin developed the ADAM system under independent research and development funding. The system is configured as a land-based transportable system.