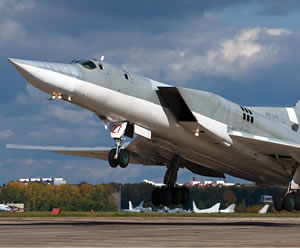 According to unofficial news sources in China, Beijing may have rekindled its interest in acquiring Tu-22M3 long range supersonic bombers from Russia (NATO code name Backfire C). There has been no confirmation from Moscow or Beijing about such a deal being negotiated. According to the unconfirmed report China is interested in buying 36 such bombers, to be designated H-10.

They will be used for long-range maritime strike role and replace the H-6 (Chinese built version of the Tupolev Tu-16 bomber) which are considered obsolete.

With an operational range of 6,800 km, the Tu-22M3 is capable of reaching the second island chain in the Pacific from the Chinese mainland. Beijing has overtly claimed sovereignty over the western Pacific, in a direct challenge to U.S. strategic policy. While the Tu-22M3 is a potent strike platform, U.S. or Russian standards do not consider it a modern aircraft, as it would be vulnerable to most air-defense assets employed with U.S. Carrier Air Group.

A Modernized ‘Backfire’ Prepared for Testing