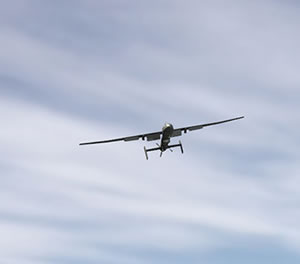 Unmanned vehicles are becoming essential part of modern warfare, but the military is seeking to gain new capabilities for such platforms, relieved from the operational restrictions bounding them to operating bases, involving complex issues of access rights and permission that usually hinder operations that are often handled covertly, at night and far away from the prowling eyes of the media.

The US Navy is already operating several types of UAVs, including the lightweight Boeing/Insitu ScanEagle, launched and retrieved from ships, and the FireScout helicopter-class drone capable of vertical takeoff and landing on board vessels equipped with flat decks. Both have already been used operationally in the Persian Gulf, Indian Ocean and Libya. Both systems proved valuable, but are lacking the endurance, payload capacity (or both), to effectively integrate with naval operations. For such missions the US Navy is considering new classes of unmanned systems, the potentially stealthy X-47B, soon to de tested on board an aircraft carrier represents one of the concepts, to be followed by the Reaper-size UCLASS – designed for medium-altitude and long endurance (MALE) recce and strike missions, operating from conventional (flat deck) aircraft carriers.

A third option is currently being evaluated under DARPA’s Tactically Exploited Reconnaissance Node (TERN) program, a complex designation named after the family of seabirds known for flight endurance, during their annual migration. With its TERN, DARPA wants to introduce a new type of UAS that will be able to deploy from destroyer and frigate size vessels, such as the Independence Class Littoral Combat Ship (LCS-2). With TERNs the LCS will be gain ISR and strike capabilities faster and almost anywhere in the world.

In December 2012 the X-47B embarked onboard the aircraft carrier USS Harry S. Truman for taxi trials. It is on schedule to fly to the USS George HW Bush, with first landing expected in April or May 2013, becoming the first conventional UAV to land on an aircraft carrier.

Another Navy program currently known as Unmanned Carrier-Launched Airborne Surveillance and Strike (UCLASS) follows on the heels of the Northrop Grumman-led X-47B Unmanned Combat Air system demonstration program (UCAS-D) currently underway. UCLASS will take the carrier-deployed drone a step further, aiming to deploy a small unit of drones on board a carrier for testing by 2020. UCLASS is also expected to follow a tailless design, all potential competitors – Lockheed Martin, Boeing, Northrop Grumman and General Atomics have discussed such designs in addressing the program since the Navy embarked on the concept in 2011. Relying on its reduced signature (stealth), autonomy and precision attack capability, UCLASS will extend the carrier air group capability, particularly in operations in denied areas, as well as enabling the Navy to launch recce missions and attacks against targets of interest from positions in the open sea, thus avoiding complex and lengthy preparations required with access permissions from neighboring countries, necessary for operations of land-based drones. The Navy has yet to define the specific requirements for this class of drones, is expected to publish a Request for Proposal (RFP) for the new drone sometime in 2013. According to Navy officials, UCLASS will be able to carry weapons already available on board aircraft carriers, which means payload capacity and weapons bay will have to be adjusted for large payloads.

The large footprint required for Fixed-wing manned and unmanned aircraft and the limited range and endurance of helicopters restrict naval operations closer to shore or relying on shore-based assets for operations from land bases. Establishing these bases or deploying carriers requires substantial financial, diplomatic and security commitments that are incompatible with rapid response.

DARPA expects the TERN to be able to take off and recover automatically from ships, operating safely even at high sea condition up to sea state 5.

Providing small vessels such as the 2,800-ton Independence-class Littoral Combat (LCS) with MALE drones means a radical expansion of naval capabilities, as such drones will be able to can carry payload weight of about 600lb over a distance 600-900nm from its host vessel. The FireScout can also carry 600 lbs, but its endurance is limited to five hours. The larger Bell 407-based MQ-8C will extend the endurance to 11hr with a similar payload, still short in terms of MALE standards.

“It’s like having a falcon return to the arm of any person equipped to receive it, instead of to the same static perch every time,” said Daniel Patt, DARPA program manager. “About 98 percent of the world’s land area lies within 900 nautical miles of ocean coastlines. Enabling small ships to launch and retrieve long-endurance UAVs on demand would greatly expand our situational awareness and our ability to quickly and flexibly engage in hotspots over land or water.”

DARPA will present its vision to industry on March 20, 2013 at a conference set for industry members interested in becoming involved in the program. DARPA expects the TERN to be able to take off and recover automatically from ships, operating safely even at high sea condition up to sea state 5. TERN will be designed to carry payloads up to 600 lbs, over 600-900 nautical miles. The launch and recovery system would have to fit Littoral Combat Ship 2 (LCS-2)-class ships and other surface combat vessels as feasible. The weapons to be carried by TERN-class drones are likely to be smaller, compared to the weapons to be carried by UCLASS.

Daniel Patt, DARPA program manager: “We’re trying to rethink how the ship, UAV and launch and recovery domains – which have traditionally worked in parallel – can synergistically collaborate to help achieve the vision of base-independent operations for maritime or overland missions”

One of the biggest challenges DARPA is seeking to solve is how to operate large aircraft from smaller ships, even in rough seas. Such aircraft should provide range, endurance and payload characteristics of land-based MALE drones, yet endure the maritime environment. Another challenge is support personnel. Land based drones are typically supported by flight operators, land operators, technical support teams and maintainers. When deployed at sea, drones require significant modifications to support the systems. Operating TERNs on small vessels will require minimal personnel for operations and maintenance. It will also be designed to occupy minimal space for storage. The concept of operation envisions deployment of TERNs on existing vessels such as the LCS-2 on-demand, with and minimal and reversible ship modifications for deployment. A TERN objective system operating from a single ship should be able to provide a persistent orbit at radius using not more than two airborne TERN vehicles.

DARPA plans to roll out 40 month TERN program in three phases, culminating in a full-scale launch and recovery demonstration. The TERN program has aggressive schedule and budgetary goals; demonstration approaches that leverage the re-use of existing hardware components and software components are highly encouraged. New technologies likely to be used include the use of precision relative navigation for approach and landing, high bandwidth air vehicle control, and energy addition and mitigation, supporting the launch and recovery phases.