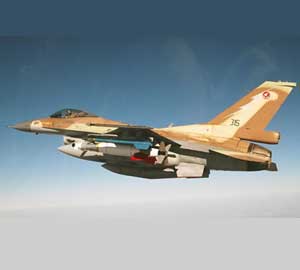 The recent escalation of tension in Syria comes at a time when the Assad regime, actively supported by the Iranians through their Lebanese proxy Hezbollah and backed by quiet nod from Moscow, is succeeding to turn the tide of repeated wins by the rebels. Until this turn, Sunni rebels were closing slowly on some of the regime’s power centers in Damascus and in other cities throughout the country. Defense-Update reports.

With their back to the wall, the ruling Allawis, backed by the Shiites turned to the use of massive bombardments and use of military forces, including ballistic missiles fired on areas held by rebels, indiscriminately hitting populated urban areas. In recent weeks more evidence came to light about the use of chemical weapons by the regime, although the means of delivery haven’t been clear. The world turned its back on this evidence, despite repeated warning. The main concern of the West was that such weapons would fall into the hands of islamic terror organizations and used elsewhere, causing massive casualties or  extortion. For Israel, the danger that such weapons could fall into the hands of Hezbollah were unacceptable.

Whether the Syrians were using missiles, artillery, air attacks or unmanned aircraft, facts proving the regime deployed such weapons, despite international warnings, are now evident. Following the escalation Washington has been considering ways to change its policy to assist the rebels. However, given the conflicting Russian interests in Syria, a direct involvement of Washington seems unlikely. The Israelis are inevitably drawn into this vaccum, by taking advantage of the Syrian chaos  by reducing the intervention of Iran and its proxies and destroying game changing weapon shipments from Tehran to hezbollah and destroying their strategic reserves based in Syrian arms depots.

With Hezbollah eagerly supporting the Syrian Assad regime with Iranian assistance, Syrian government forces have won back control of areas along the Lebanese border. But elsewhere, the situation is deteriorating as the country collapses into total chaos. Iran, which for years has used Syria as a protecting staging area sustaining its Lebanese proxy  Shi’ite Hezbollah is realizing it is time to liquidate its investments, and seek a safer home for its assets – inside Lebanon. The missile storage at Mt. Qasioun served as one of their storage sites. On this mountain site, overlooking the capital Damascus, protected by the close proximity of the Syrian presidential palace and its prominent military installations, Iran stored ballistic missiles and ammunition which it planned to ship to Hezbollah in time of war.

But at the present Syrian chaos, Qasioun seemed no longer safe. In fact, the fighting turmoil became an opportunity to open a virtual ‘hunting season’, seeking and destroying these missiles, and other weapons, the Israeli military considers ‘strategic’ keeping their military balance with Hezbollah. Since Thursday night, May 2rd, 2013 reports from Lebanon indicated the Israeli air force repeatedly performed ‘mock airstrikes’ from Lebanese territory toward the Syrian border, in daylight and at night.

It seems now cleareniugh, that these manoeuvres were not mock attacks but the real thing – as the aircraft actually may have  launched stand-off weapons such as the advanced SPICE glide bombs and Popeye missiles, made by RAFAEL. These weapons are capable of hitting point targets over 100 kilometers away. The SPICE is a glide weapon, which does not leave any smoke trail or other indication, until impact. Such tactics would keep the Israeli fighters immune from Syrian air defense missiles that are still actively protecting Syrian airspace. Indeed, seen in the videos apparently taken around Damascus during the attack only explosions could be heard, without the noise of the attacking jets.

The targets attacked on Thursday seemed to include a new shipment of missiles stored near Damascus International airport. They were actually targeted immediately after this very shipment of Iranian missiles landed on Damascus airport, indicating on the excellent intelligence involved.

According to US sources these missiles were the latest Fateh-110 Mod 4 missiles, offering increased lethality and precision. About that time sirens were also activated on the Israeli side of the border, although no attacks were reported. Authorities attributed the repeated alarms to ‘technical errors’ but bo further explanation was given. Another attack that followed on Saturday night aimed at four storage bunkers on Jabel Qasioun, west of the Damascus. It was actually a secret Hezbollah storage depot keeping their strategic reserves safe against hostile attack. Video clips taken after the attack show massive explosions that followed the initial attacks, apparently caused by secondary explosions of rocket fuel or warheads. By morning, as rescue forces arrived at the area, explosions were still heard throughout the scorched area.

Using stand-off attacks from Lebanon enabled the Israelis to achieve their goal while keeping risks at manageable level. Although Israel demonstrated more than once its ability to overcome the Syrian defenses. However going after such prime targets, where enemy air defenses are in high alert requires significant prior preparation and massive destruction of most of the enemy’s air defense before the attack starts. Such a campaign, as was brilliantly executed over the Lebanese Baka’a in 1982. Under the present conditions, it could however draw Israel, Syria and Lebanon into a massive missile exchange if not all out war.

The Israelis recognize the risk that the recent moves could draw some retaliation from Syria or Hezbollah, but considers such response short term and limited in its intensity. For good measure the Israeli Air Defense command has deployed two Iron Dome counter-rocket batteries to the north of Israel, protecting the major population centers and strategic sites likely to present targets to such missile attacks. The airspace in Northern Israel was also closed to civilian traffic, clearing the area for military operations; the Haifa municipality also increased its alert status, and announced that the 11 km long Carmel Tunnels would be providing a shelter in case the city is attacked as it was in 2006.

Update: On Monday afternoon two mortar bombs were fired from Syria at an Israeli outpost in the Golan Height, without causing damage. The Israelis filed a complaint with the UN.

But the likelihood of counterattack is considered low. Since the strikes were directed at Hezbollah and Iranian assets, not directly targeting the Syrian military, the Syrian regime can continue to threaten and promise painful retaliation as it did in the past, but refrain from punitive action against Israel, at least not in an act that would escalate the situation. For Hezbollah, it seems the worst time to engage Israel in a military conflict  – with their Iranian supply lines clearly exposed, as demonstrated by the recent Israeli attacks they would prefer to bolster the safety of their precious weapons depots for the future.

Some U.S. lawmakers say Israeli airstrikes in Syria demonstrate that the United States could take action to protect Syrian civilians. Sofar the U.S. has provided non-lethal aid to Syrian rebels and humanitarian assistance for Syrian refugees, but the administration has resisted calls for establishing a no-fly zone over Syria. Washington is reluctant to hand out military assistance to rebels, since some of the groups are extremist Sunni Islamists, including those affiliated al-Qaida. The U.S. had learned their lessons from Afghanistan, Iraq, Egypt and Libya, where Islamists tend to sieze power when they have a chance. Last week, U.S. Defense Secretary Chuck Hagel said the administration is re-thinking a full range of options, including possibly arming Syrian rebels. He stressed that no decisions had been made (VOA).