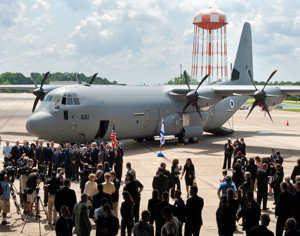 Lockheed Martin delivered today the first C-130J Super Hercules airlifter to the State of Israel during a ceremony at Lockheed Martin’s Marietta, Ga., production facility. This is first of three C-130Js currently on order for the Israeli Air Force (IAF), which has operated legacy C-130s since 1971. The aircraft will remain in the USA, to receive mission specific hardware delivered from the US and from israel, configuring the aircraft to meet the IAF requirements. The aircraft is expected to be delivered to Israel by within a year.

According to IAF Chief of Staff Brig. General Hagai Topolanski, the new C-130J will offer almost 30 percent improvement over the current ‘Hs models in service with the IAF. “These new aircraft will not replace all H models in service. Those C-130Hs that will remain in service will upgraded, extending their life and bringing them to higher operational capability” Topolanski told Aviation Week in a recent interview.