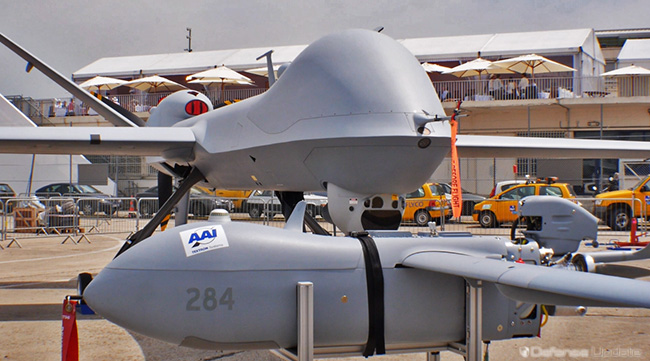 Following its successful penetration of the French market, General Atomics Aeronautical Systems, Inc. (GA‑ASI) is planning to introduce an exportable, certifiable variant of its Predator B Remotely Piloted Aircraft System (RPA), paving its way into more markets where the current Predator B ‘Reaper’ was excluded from by US export limitations. The current Predator B is currently in service with the US Air Force, the British Royal Air Force and Italian Air Force, and has recently selected to provide an interim solution equipping the French Air Force units. Defense-Update reports.

“It is imperative that we ensure airworthiness certification of Predator B both at home and abroad as coalition forces withdraw from Afghanistan and nations transition mission focus to protection of the homeland and other civil uses.” Neal Blue, chairman and CEO, GA-ASI

While the aircraft has been fully compliant with the airworthiness requirements of the U.S. Air Force and anticipated NATO foreign customers and is also offering enhanced capabilities for integration into domestic and international airspace, limitations are hindering the use of these drones in European civil managed airspace.

The new variant will be based on the company’s MQ-9 Block 5 Predator B aircraft, using only exportable technology (similar to the Predator XP), and will support the Advanced Cockpit Ground Control Station (GCS) layout. In 2011 GA-ASI introduced the Predator XP, licensed by the U.S. Government to be proposed for sale to a broader customer base, including countries in the Middle East and North Africa. It seems that the new variant of Predator B will follow this path, although it initially addresses European opportunities.

“Predator B is the most cost-effective and best-valued RPA in its class and continues to draw significant interest from our NATO allies,” said Neal Blue, chairman and CEO, GA-ASI. “It is imperative that we ensure airworthiness certification of Predator B both at home and abroad as coalition forces withdraw from Afghanistan and nations transition mission focus to protection of the homeland and other civil uses.”

GA-ASI is required to carry out enhancements in its aircraft to meet airworthiness to the NATO Standardization Agreements (STANAGs) and UK Defence Standardization (DEFSTANs). For these tasks the US company has partnered with the German company RUAG Aerospace Services GmbH. The two companies have been teamed for the past two years to offer Predator B to meet the surveillance needs of the Federal Republic of Germany, but this is the first formal contract between them. Effective April 1 2013, RUAG has been engaged to provide technical assistance with the analysis, decomposition, and management of airworthiness requirements as they pertain to Predator B RPA airworthiness.

Pursuing more opportunities in Europe, GA-ASI has recently signed an agreement with the Dutch company Fokker, to support positioning Predator B to the Dutch Government’s need for a Medium-Altitude Long-Endurance (MALE) Unmanned Aircraft System (UAS) requirement. Under the agreement announced last week, Fokker will assist in the adaptation of Predator B hardware to Dutch national standards; offer guidance and support for Dutch airworthiness certification requirements; provide design, manufacturing, and support for the Electrical Wiring Interconnection system; engineering support related to landing and arresting gears; and logistical, operational, and maintenance support of Predator B after delivery to The Netherlands Ministry of Defence.