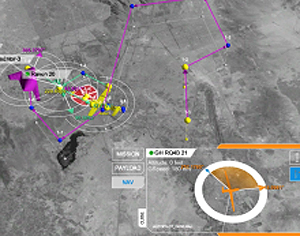 The US Navy has recently evaluated the operation of multiple types of unmanned aerial systems (UAS) from a single command and control (C2) system. During the demonstration, a team set by Lockheed Martin team integrated command and control (C2) and and intelligence, surveillance and reconnaissance (ISR) systems to provide mission planning, sensor and common operational control for multiple UAS platforms to provide operators with one comprehensive mission picture. The demonstration was executed in support of the Navy’s upcoming Unmanned Carrier Launched Airborne Surveillance and Strike System (UCLASS) and Common Control System programs. defense-Update reports

For this demonstration the team used a new open architecture framework integrated with DreamHammer’s Ballista drone control software and Navy compliant software protocols, enabling a single operator to manag multiple UAS platforms simultaneously. The team also accessed the new ‘Navy Cloud’ capability to demonstrate control of the ISR sensors and fully integrate the data into one complete mission picture. The team then used this picture to rapidly re-task and re-route the UAS assets. In addition to using DreamHammer’s Ballista drone control software in this UCLASS demonstration, Lockheed Martin is teamed with DreamHammer Government Solutions in pursuit of the upcoming Navy Common Control System contract.

“This demonstration is an important step to fulfilling the Navy’s requirement for a Common Control System that leverages multiple architectures from varied operational systems,” said Rob Weiss, executive vice president of Advanced Strike and Intelligence and Reconnaissance Systems for Lockheed Martin Aeronautics. “A combined C2 and ISR capability will be essential as the Navy integrates UAS, beginning with UCLASS, into its ISR enterprise. We believe in their vision and this demonstration is an example of our work to reduce risk and make the Common Control System a reality.”

“This demonstration underscores the critical role that common command and control systems can play in actual operations by highlighting the ability to enrich the overall ISR picture and increase the speed of decision making,” said Jim Quinn, vice president of C4ISR Systems for Lockheed Martin Information Systems and Global Solutions. “An integrated battlespace picture emerges when we link the platforms, sensors, and information collected into one enterprise view that will enable the U.S. Navy to better achieve their C2 and ISR missions.”

Ballista is an intelligent control platform that integrates unrelated unmanned drones and robots from different manufacturers into one system. The system is built on an open platform which allows for autonomous and simultaneous control of multiple unmanned vehicles across all domains – space, air, sea and land — and can be run from nearly any computer including a tablet or a smartphone. DreamHammer has been licensing the software and providing support services to U.S. military and intelligence customers since August 2011. The system is currently available commercially, while previous releases were only made available to U.S. military and intelligence customers.