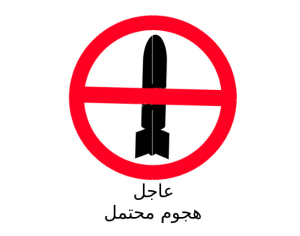 On February 25, 2013, a 26-year-old Syrian “hacktivist” who had fled Damascus was sitting up late in his apartment in a Washington suburb watching the Syrian civil war unfold on Twitter. A man living near an air base southwest of Damascus tweeted that a SCUD missile had been fired and its fiery tail could be seen streaking north. Syria is believed to have at least 700 such SCUDs. Having done his compulsory military service in a Syrian artillery unit, Dlshad Othman knew that this SCUD was likely headed for the northern Syrian city of Aleppo. He also knew the missile would be landing in roughly six minutes. But who would see the Tweet in time? As he waited helplessly for the SCUD to land, Othman hatched an idea: Set up an early warning system that could take citizen reports of a ballistic missile launch, calculate the likely target, and send alerts in real time to civilians inside the strike zone. The Atlantic reports.

Othman’s SCUD early warning system began operating on Wednesday. It is called Aymta (dot com), which means “when” in Arabic. Users can opt to receive alerts by phone, text message, SMS, e-mail or RSS feed, or, if the regime cuts off internet access, as it often does, via a broadcast on satellite television or radio frequencies outside of regime control. Within the first 24 hours, 16,000 people viewed his website and 87 had registered to receive his alerts – although up to 40 percent of Syria was reportedly experiencing power outages at the time. Two satellite television stations also signed up for alerts. Some Syrians have already registered from abroad to track impending attacks on their hometowns and alert their families.

The software automatically calculates the trajectory and likely arrival time of the missile. The more data it receives about where and when attacks are imminent, the more its accuracy will improve. A major concern for the operators is the security of their informers. Aymta’s secure reporting systems recognize that Syrian cellphones and internet traffic are monitored. The Syrian government has proved adept at infiltrating opposition computers, including in one case building malware into a piece of circumvention software that was supposed to let opposition forces evade government surveillance. Wary of such traps, Othman has equipped a group of trusted civilian monitors with hardened digital communication technologies that allow them to transmit information from a variety of sources, including visual sightings of SCUD launches and other reliable information, into a well-defended computer network. “We are doing our best to deliver 99 percent security,” said Othman.

There is no such thing as a “100 percent secure” computer network, only one that is engineered to be difficult to penetrate, said Ian Schuler, a former State Department specialist in internet freedom and security digital technologies, now at the nonprofit New Rights Group. “Anything can be cracked.” By Saturday, the Syrian regime had apparently found Aymta, judging by the large cyber-attack that took down the site for 20 minutes. Othman had expected such a distributed denial of service (DDOS) attack and is trying to speed up his defenses.

Jeffrey Lewis, a missile expert following the Syrian conflict at the Monterey Institute for Strategic Studies, who has advised Othman on the project, is worried both about Othman’s own safety and the potential for mass arrests by the Syrian regime of anyone near a SCUD base. “I don’t want to know how you know your spotters,” Lewis told Othman. “You need to make sure your spotters don’t know one another and one person doesn’t know multiple spotters… It’s built on trust,” Othman replied. He is in contact with opposition coordinators in Syria who know and trust one another. He has applied for asylum protection in the United States and has decided to use his real name for the project. “If I will not use my real name, people will not trust this,” he said.

Though the U.S., Turkey, and other countries may have radar or other data that could warn of SCUD launches, they don’t share, said Lewis. He believes the U.S. should provide whatever information it can to the residents of Aleppo and other cities under attack. Civilians in war zones have a right to collective self-defense, but can rarely exercise that right in high-tech modern warfare. President Obama’s newly announced lethal aid to the Syrian rebels includes small arms and undefined intelligence-sharing, but does not include early warning that could have saved many lives if it would have supported Aymta with real-time alerts.

Syria has fired dozens of SCUDs and other missiles at targets in northeastern Syria. According to the Syrian Missile Launch Database, maintained by the Washington Institute of Near East Policy, between December 2012 and March 2013 the Assad regime fired dozens of surface-to-surface missiles against opposition-held areas, including major cities and towns such as Aleppo, Al Raqqah, and Der Ez Zor. Human Rights Watch reported that four SCUDS fired on Aleppo in February killed 141 civilians, including 71 children.

Most of the casualties from those missile attacks are caused by buildings collapsing onto people. Othman says merely instructing people to run out into the street or into a basement would increase the odds of survival. SCUDs are among the slowest of missiles, and in theory, a few minutes’ warning should be enough, especially if activists in the target zones rig up local public address systems to sound air raid sirens when Aymta sends a warning.

Aymta is part of a growing movement among by idealistic “hacktivists” to deploy advanced technologies for peace-building. A 13-year-old Israeli developed an iPhone app called Color Red that sounds an alarm based on data from the Israeli Defense Forces about incoming missile fire from Gaza. The distance from launch to target is so short that citizens have as little as 15 seconds to take cover. Even so, the app has been downloaded at least 130,000 times.

Othman and his partners intend to expand the Aymta system to warn civilians of other types of threats — including approaching tanks, convoys of militia fighters, or other information. Othman plans to share his open-source software for use by activists in other countries. “This is not just for Syria,” he said. “We believe there are a lot of people in the world who are in a bad situation like ours.”