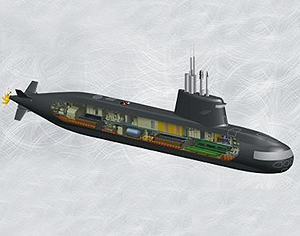 The Russian shipbuilder Rubin plans to update its S-1000 submarine design introduced in 2004 under cooperation with the Italian shipbuilder Fincantieri. The 1,000 ton diesel-electric powered submarine was positioned to be a ‘compact sub’, smaller than the Project 636 (Kilo) class and Amur 1,650 ton submarines Rubin is already offering.

The S-1000 was one of the contenders for the Indian Project 75 submarine program, that eventually favored the French Scorpene in 2005. For the Indian bid the S-1000 was positioned against the larger Rubin 1650 project submarine – both have lost to the 1,700 ton French sub design. Amur 1650 is still considered for the second (P75i) segment of the Indian program but the biggest challenge for Rubin is the questionable heritage of this type – the Lada class submarine developed for the Russian Navy but cancelled in 2011. The Russians are hoping that, by resurrecting the cooperation with the Italians, they could turn their designs into more competitive ones, thus compensating for the damage caused by the cancellation of the LADA. While the cooperation promoted by the Italian MoD and Russian export agency Rosoboronexport, the S-1000 is positioned to attract navies in Asia and the Middle East, rather than compete for the procurement contract with Italian or russian navies.

Originally based on the Russian Amur 950 design from Rubin, S-1000 introduced modern construction techniques mastered by the Italian shipbuilder (that have never built submarines but is well known for its efficient surface vessel constructions). These capabilities have helped reducing the S-1000 cost to around $200 million per boat. Improved efficiency means the sub can be operated by a crew of only 16 able submariners.

The 56.2 meters long vessel has a top speed of 14 knots and is equipped with a new fuel cell-powered Air Independent Propulsion (AIP) system developed by the Italian firm, that can maintain the boat underwater on a two-week (15 days) mission. The external envelope of the S-1000 remains unchanged, while internally, the designers are introducing changes that better meet customer requirements. Baranov said.

Designed primarily for exports to third countries, the new submarine will feature an impressive array of weaponry, including Italian heavyweight, wire-guided Black Shark torpedoes or Russian Club-S cruise missile system capable of hitting underwater, surface and land targets. When required the boat can accommodate up to 15 commandos. While Rubin 950 was designed with four torpedo tubes and ten vertical launchers for missiles, the S-100 has six torpedo which can launch 21″ wire guided torpedoes (533mm) or anti-ship/land attack cruise missiles. The submarine has a storage facility for eight torpedoes/missiles. This design made the entire hull area more spacious and better configurable for multiple missions.

Despite its small size (56 meter long) the sub is designed to include fuel-cell based air-independent propulsion system (AIP) developed by the Italian firm accelerating the submarine to a speed of 14 knots. The submarine was originally designed for anti-submarine and anti-ship warfare, reconnaissance missions, and transportation of up to 12 troops (accommodations arranged in the torpedoes storage area).

According to Andrei Baranov, deputy head of the Rubin Central Design Bureau, these compact submarines are currently in great demand in the world. “Countries that are actively looking for new submarines are setting some totally unexpected demands for those ships,” Baranov noted. 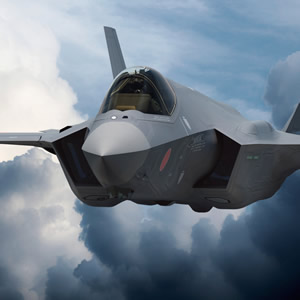 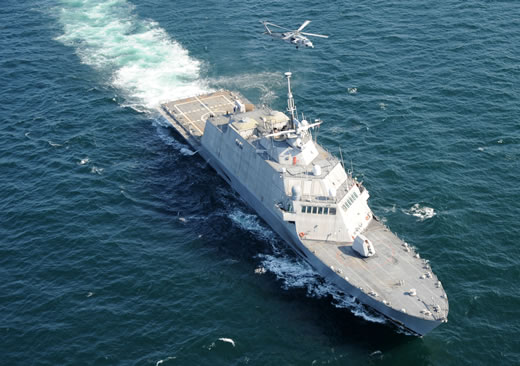 U.S. Navy Awards Over $900 Million as a First Step Toward Acquisition of 20 Littoral Combat Ships (LCS)