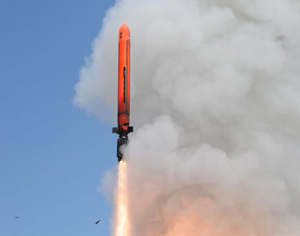 It successfully carried out the firing test on July 1st, 2013. The test, representing a vertical launch from a frigate, took place at the DGA’s Biscarrosse missile test centre. MdCN will eventually equip the French Navy’s multi-mission frigates (FREMM) and its Barracuda submarines.

Featuring a range of several hundred kilometers, MdCN is intended for strikes against targets deep within enemy territory. It complements the SCALP air-launched cruise missile from which it is derived. MdCN will comprise one of the strategic weapons carried by surface vessels and submarines.

According to the announcement, the firing scenario was especially demanding as, in addition to meeting range objectives, it also served to validate the missile’s performance with regard to its autonomous terminal navigation using infrared target recognition.