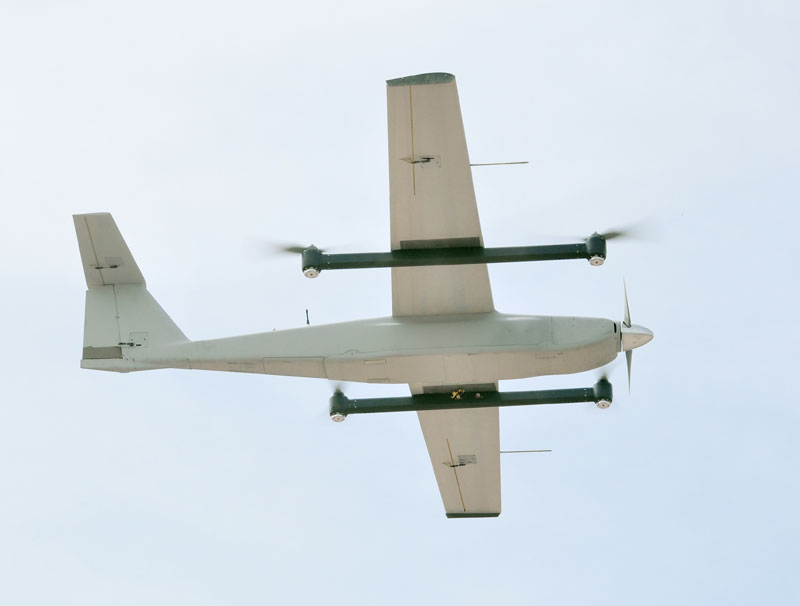 A new ‘hybrid Quadrotor’ concept developed by Latitude Engineering has been applied to several fixed-wing UAV systems, converting them into vertical take-off and landing capable, while retaining a significant part of their original endurance and payload carrying capability. The company applied for patent for its technology and is already licensing it to UAV manufacturers.

The Hybrid Quadrotor (HQ) is an innovative airframe technology that the combines the vertical takeoff and landing (VTOL) capabilities of a quadrotor and the efficiency, speed, and range of a normal fixed-wing aircraft. The concept enables designers to deliver air vehicles with longer mission endurance while eliminating the need for runway preparation and landing facilities for launch and retrieval. Latitude has demonstrated the system utilizing the Cloud Cap Technology’s Piccolo Autopilot we have enabled a role-expanding capability for unmanned systems.

Latitude has developed its own Hybrid Quadrotor drone, the HQ20, capable of carrying a two-pound payload on five hour mission, and is currently working on a larger platform, HQ 50, that will increase the payload to eight pound and mission endurance to 24 hours. Additional vertical lift for this platform is achieved by utilizing tandem rotor configuration.

Another variant of the system has been demonstrated in a concept conversion of the Sensintel SilverFox B4, also displayed at AUVSI.A similar solution was developed with Arcturus using the T-15, modified into the ‘Jump 15’ introduced by Arcturus at AUVSI 2014.

Arcturus has introduced the Jump-15, a Hybrid Quadcopter UAV at AUVSI 2014. Within a year the company is also planning to provide a larger version, Jump 25, that will be able to carry the TASE500 HD payload on a 12 hour mission.

Arcturus plans to apply the JUMP technology to the entire family of Arcturus aircraft, including the CAT25 expected in 2015. The technology is allowing for precision vertical take off and landing VTOL while retaining long-endurance and large payload capacities that cannot be achieved with comparable rotary wing platforms. The quad rotor system is fully integrated with the autonomous flight control and Piccolo autopilot command center software, enabling fully autonomous flights from launch to land. Reducing flight preparation to less than 15 minutes, the entire mission can be supported by a two man crew. Unlike electrically powered hybrid quadrotors, these UAVs will have the option to take off and land with the main engines running, thus reducing the complex transition phase and weight of airborne engine starter. To prevent propeller hitting the ground the vehicle will take off and land from a bench platform, using digital GPS to land precisely on the designated point.

At AUVSI 2014 Arcturus UAV announced development efforts on their JUMP-25 and CAT-25 long endurance UAVs. The JUMP-25, vertical takeoff and landing capable, will have a larger fuselage and wingspan and more powerful VTOL and tractor motors than the recently announced JUMP-15 and JUMP-20 models. The CAT-25 will be a larger version of the company’s T-20 catapult launched UAV.

According to the system’s developers, the HQ VTOL system is intended only for launch and recovery and not for ‘hover and stare’ type missions. Examples of missions that suit HQ include delivering medical supplies to remote areas, placing sensors on ice, or picking up samples from a collection team in the field. The company is also working on shipborne applications for the technology.

Another hybrid multirotor application based on a pure electric version of the Albatross, developed by the Texas based Dronetech UAV, utilizing the Veronte autopilot system. The version currently flying is using electrical propulsion only, but a scaled up version designed by the company would weigh 25 kg, of which 15 lbs will be available for payload. The vehicle will use six engines – a 2.5-3 hp main engine, an electrical engine designed for self recovery in case the main engine fails (since it will be a non certified engine), and four electrical motors used for vertical lift. This hybrid Albatross will have mission endurance of 12 hours. The company is considering the aircraft to be able to deploy from vessels at sea and position the drone for maritime surveillance applications. A larger version powered by an internal combustion main engine would have an endurance of 60 hours, carrying payloads weighing up to 110 pounds. 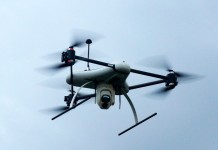 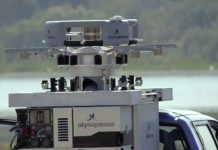 Hovermast – a bird’s eye view over the hill