Home Exhibitions & Conferences Hacking a Blackhawk chopper into a gunship

Helicopters supporting ground combat missions are highly vulnerable to enemy fire, particularly gun fire by small arms, machine guns and RPGs. While armor protection is available to protect the crew and mission critical systems, helicopters would often abort landing in a ‘hot drop zone’, to avoid these risks. Air assault missions often rely on a strike package comprised of scouts and gunships, suppressing the enemy fire while the assault helicopters approach low and fast to discharge the troops or pickup critically wounded soldiers on casualties evacuation (CASEVAC) missions. Under these missions, it would be difficult to continue and suppress the enemy throughout the mission, and then, assault helicopters would rely on their own gunners, manning ramp and door mounted light and medium machine guns to shoot back at the enemy.

Most armies do not have a substantial fleet of gunships and scouts to support every CASEAVAC and assault drop. Therefore, some CASEVAC missions could be compromised by lack of support while others would be aborted, both options would put soldier’s lives at risk.

Sagiv Aharon, an experienced mechanical engineer and ex-paratrooper has come up with an idea to equip assault helicopters with a remotely operated weapons station that would deliver effective suppressive fire by the helicopter itself, an effect that would be as effective as that delivered by helicopter gunships. A working model of the system currently in development will be displayed at the Israeli national pavilion at the Eurosatory 2014 exhibition in Paris next week.

This small-footprint, fully-robotic Remote Weapon Station (RWS) is developed for use on UH-60/S-70 type helicopters; according to Aharon, other assault helicopters such as NH90, EC-725, Super Puma or AW149/159 would require minor modifications to work with the system. The system would be useful for UH-60s on CASEVAC, assault and special operation missions. As the systems do not require modifications of the helicopters, RWS could be mounted on any UH-60/S-70 helicopter or moved between helicopters according to operational needs.

As part of the risk reduction process Duke has recently completed testing of a prototype demonstrating the ‘delta robot’ motion platform and remote control, “Now that we have accomplished a major milestone in the development of the technology, the company is seeking partnerships with helicopter and weapon manufacturers to bring the system to the market.” Sagiv Aharon, Founder and CEO of Duke Airborne Systems told Defense-Update.

The compact, electrically powered system comprise a robotic pedestal using seven degrees of freedom. During flight the system is stowed inside the cabin. Upon operator command the RWS is extracted by two robotic arms, and attach to a docking plate mounted at the belly, harnessed onto the cargo hook assembly. Secured in place within seconds, the system is ready to fire at short notice. The EO payload and gun are controlled form a tablet computer that can be operated by one of the pilots or a third crew member.

The RWS’ six-axis motion platform enables the EO payload and Bushmaster gun to track targets on the move, and lock the line of fire on target

Fitted with a multi-spectral EO payload used for fire control and coupled to optional hostile fire detectors (if available on the helicopter or mounted on the pedestal), the RWS mounts the ATK 25mm lightweight bushmaster gun, with 400 – 2,000 rounds of ammo, the gun can traverse +/-210 and elevate: +5 to -85, engaging any target in sight regardless of helicopters’ manoeuvres. Unlike vehicle-based RWS that use electrical motors for elevation and traverse, in the helicopter application requires more degrees of freedom, provided by the”delta-robot” motion platform’s six-axis motion platform, enabling the EO payload and gun to track targets on the move, and lock the line of fire on target, as viewed by the EO sight, while cancelling platform induced vibrations.

The entire system weighs about 500 kg (1,102 pounds) is packed into a 1.2×1.2 meter floor area, 1.3 meter high box that can be rolled on and off the helicopter within minutes. The belly attachment as well as entire system can be ejected by the pilot and crew, in case of emergency. Power, ammo feed and controls are all fed through the cargo hatch in the floor, attaching the assembly without any modification to the helicopter’s airframe.

According to Aharon, the weapon occupies only a third of the cargo space near the door and is designed to meet balance requirements and weight limitations of the UH-60/S-70 type. The RWS will be provided with a set of ballast weights to enable instant adjustments to balance any helicopter configuration.

In an emergency, the capsule and tracks can be easily jettisoned by the pilot, who has full control over the cargo hooks. With its, the system is designed for extreme stability while in flight, handling most interference while maintaining target-locking. 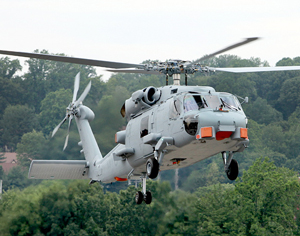