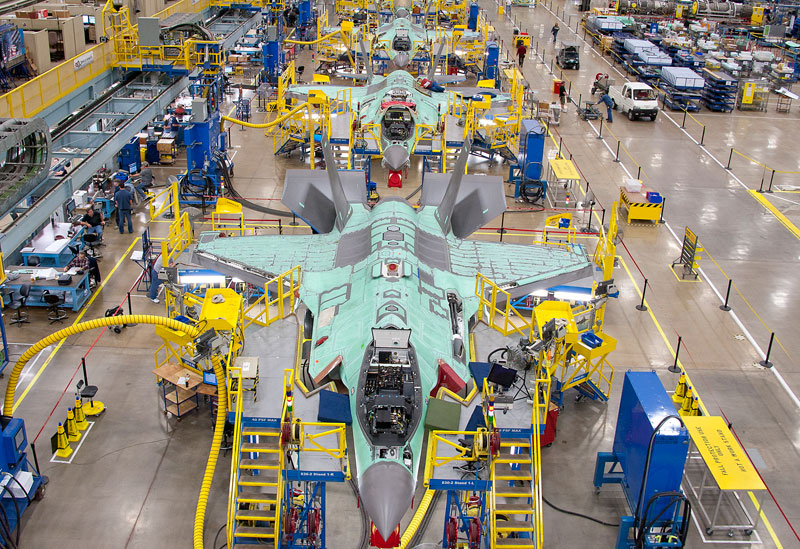 The three leading industry partners in the F-35 industry team – Lockheed Martin, Northrop Grumman and BAE Systems have signed today an agreement with the US Department of Defense, to implement cost reduction initiatives to lower the production costs of F-35 aircraft. The goal is to bring the procurement cost of the fifth generation Joint Strike Fighter (JSF) to the equivalent of today’s 4th generation fighters by the turn of the decade.

“By 2019, we expect that the F-35 will be nearly equal in cost to any other fighter on the market, but with far more advanced capability.” Lt. Gen. Chris Bogdan, F-35 Program Executive Officer said. In the future, the government is looking at similar ways to drive down the costs of operating and sustaining the F-35.

The F-35 program is expected to enter the multi-year production phase in 2017-2018. In total, the US and international customers are expected to buy over 3,200 F-35 over the next two decades.

These cost reduction will be driven by upfront investment by Lockheed Martin and the F-35 industry teammates BAE Systems and Northrup Grumman. The three companies committed to spend up to $170 million in cost saving ‘affordability measures’ over the next two years, which are expected to directly result in lower priced F-35s.

By 2019, we expect that the F-35 will be nearly equal in cost to any other fighter on the market, but with far more advanced capability

Once such cost reductions are achieved, industry will be able to recoup the investment, with profit, by delivering production volumes. From 2016-2018, the government has the option to invest additional money, if the initial cost reduction initiatives spent by industry are successful. The government will realize its savings is through reduced F-35 unit recurring flyaway (URF) cost. The reduced URF will have long reaching benefits for the program, and international countries purchasing F-35s will also benefit from this savings.

Designated “The Blueprint for Affordability,” the agreement is built upon the U.S. Government’s Better Buying Power 2.0 initiative, which encouraged defense contractors and the US government acquisition community to determine new and innovative ways to reduce the cost of their goods and services.

Meanwhile, negotiations on the upcoming Low-Rate Initial Production (LRIP) Lot 8 are stalled, pending results of the fire that has damaged an F-35A on takeoff at Eglin Air Force Base two weeks ago. Lockheed Martin submitted its proposal for the production of 110 aircraft under LRIP 8 in December 2013 and has hoped to sign the contract last month with aircraft deliveries expected through 2016. “Negotiations will resume once the scope of the engine issue and downstream effects are known,” Kyra Hawn told Janes 360. “The JPO would not close the deal with this issue outstanding and any subsequent fixes unresolved.” Hawn confirmed.

Under a different note, Israel Aerospace Industries (IAI) reported today its progresses towards production of the F-35 fighter wings. Since signing the contract with Lockheed Martin in April 2013 for production of wings for the F-35 fighter, IAI has invested in establishing an advanced, automated manufacturing infrastructure required for the wings’ production.

The production line established at IAI’s main campus is currently in the final stages of completion. It is uniquely prepared to meet ultra high precision required for the aircraft stealth design. The upper skin of the wings comprises composite materials, developed especially for the F-35 aircraft. The line is set to maintain the highest accuracy, and maintain strict environmental control of humidity and temperature conditions.

The first article F-35 wing assembly is expected to begin as planned, in September 2014, and be followed soon after by serial production. IAI will begin delivering wing sets in mid-2015. The contract’s duration is for some 10-15 years, with potential sales reaching $2.5 billion.