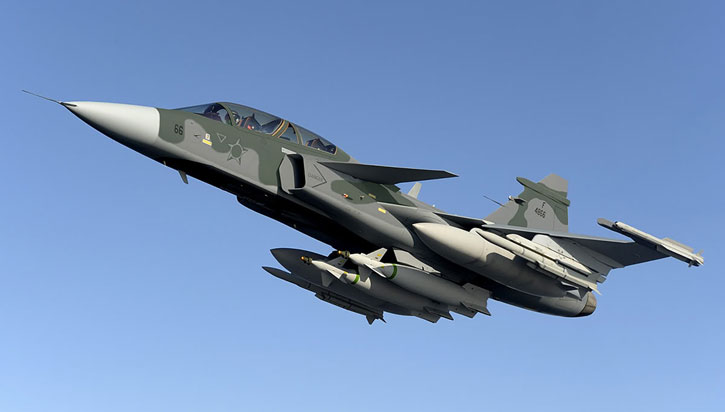 Embraer and Saab have signed a Memorandum of Understanding to partner in joint programme management for the F-X2 Project, pursuant to the selection of the Gripen NG as Brazil´s next generation fighter jet. Under this agreement Embraer will perform a leading role in the overall programme performance as well as undertake an extensive share of work in the production and delivery of both the single and two-seat versions of the state-of-the-art Gripen NG aircraft for the Brazilian Air Force. Embraer will coordinate all development and production activities in Brazil on behalf of Saab and, in addition to its own extensive work packages, will participate in systems development, integration, flight tests, final assembly and deliveries.

Furthermore, Embraer and Saab will be jointly responsible for the complete development of the two-seat version of the Gripen NG, at the same time that a strategic partnership for future global promotion and marketing of both single and two-seat versions is being discussed between the two companies. The agreement between Saab and Embraer will be implemented following a successful conclusion of the ongoing discussions between Saab and Brazil relating to the finalization of F-X2 contracts. These talks are proceeding as planned and it is hoped to reach a positive outcome by the end of 2014.

“In addition to re-equipping the Brazilian Air Force, the F-X2 project is meant to stimulate Brazil´s Defense industrial base. This partnership between Embraer and Saab will be of great importance to Brazil, because, besides participating in the development, we will be able to autonomously maintain our fleet. Embraer, as a high tech manufacturer of commercial jets, and Saab, with its tradition in the development of fighter aircraft, are complementary businesses that certainly enjoy great gains with this agreement”, says Lieutenant-Brigadier Juniti-Saito, Commander of the Brazilian Air Force.

“This agreement will strengthen the ties between the defense industries of Brazil and Sweden,” says Jackson Schneider, President and CEO of Embraer Defense & Security. “Through this partnership we will secure an excellent result for the Brazilian Air Force and we will establish solid ground for success with future business opportunities and customers,” Saab’s President and CEO Håkan Buskhe added.

The Gripen NG is a true multi-role fighter aircraft, based on the proven Gripen C/D platform. It is built to adapt to all of the changing threats and operational requirements that modern air forces face. Gripen’s combination of very advanced operational capabilities with moderate through-life costs make the fighter absolutely unique on the world market.