Seven Iron Dome Counter-Rockets, Artillery and Missiles (C-RAM) systems are currently deployed throughout Israel, and have sofar provided an impressive success rate, intercepting over 120 rockets that would have hit populated areas. According to the Israel Missile Defense Organization (IMDO), the system’s success rate is nearing 90 percent.

The new battery that was completed ahead of schedule has been integrated from modular systems collected from other programs, including training assets and the first David’s Sling Weapon System, currently undergoing developmental testing. A week later the Air Force inducted the ninth Iron Dome battery, as Rafael has accelerated the delivery of the unit, months ahead of schedule.

In addition to the new system, the Iron Dome prime contractor RAFAEL and the Israel Air Force active defense wing have implemented many changes in the operational Iron Dome systems, considerably extending their operational performance.

These extended capabilities addressed evolving, longer range threats and large salvos, as characterised by variants of the 300mm rockets from Syrian, Iranian and local production, that have entered service with Hamas in Gaza. The David’s Sling and Iron Dome share several common components, such as the radar and some battle management modules, which can be configured to support either system by software changes.

During operation Pillar of Defense in 2012 Hamas tried to challenge the Iron Dome with massive rocket barrages, of 16 and 20 rockets. Back then Iron Dome has met these challenges successfully, but the Israel MOD decided to preempt future shortages by increase the production rate of the Tamir interceptor missiles, doubling the production line capacity of Tamir missiles. In addition, continued US funding is calling RAFAEL to source at least half of the missile’s in the USA, with Raytheon becoming the lead for these US sourcing operations. (More details below) 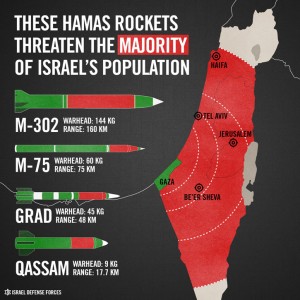 Through the first four days of the current conflict Hamas and Islamic Jihad terror organizations in Gaza have fired over 490 rockets. This time they shifted to larger numbers of long-range rockets, as well as more massive salvos, some counting up to 50 rockets fired in quick succession. Iron Dome has successfully intercepted massive salvos of 122mm GRAD rockets, as well as salvos of Fajr 3, M75 and R160 rockets, the later are M302 fired at ranges of 160 km.

Meanwhile, new reports in the USA again criticized Iron Dome as “Failing at Crucial Task” to destroy the warheads of incoming rocket targeted by the interceptor. According to the MIT Technology Review , Richard Lloyd, a weapons expert and consultant who is a past Engineering Fellow at Raytheon Integrated Defense Systems, says that because these interceptions had almost certainly not detonated the rockets’ warheads, the system is essentially failing.

Ted Postol, MIT physicist and missile-defense expert added his own critics, saying “Instead of smoothly rising to meet their targets, the interceptors were making sharp turns and engaging from the side or behind” Those problems appear to be continuing in the current conflict, Postol added.

While the two experts are widely quoted by the media, their comments about the system’s performance are countless, at least, by the clear cut results demonstrated by Iron Dome. Not only by the high intercept ratio (which can be argued, lacking clear numbers related to which rockets were actually engaged), but also by the low casualties count on the Israeli side, which clearly indicates better exchange ratio than in the Lead Cast and 2nd Lebanon War conflicts, where similar rockets were extensively used against population centers throughout Israel. With over 800 rockets fired, 635 ‘crossed the border’, 149 of the rockets were intercepted in the past five days.

Another aspect of the system’s overwhelming success is that it is too good. “Israel’s astonishingly effective Iron Dome air defense has prevented Hamas from killing Israeli Jews and spreading terror in the civilian population. Ironically, though, the better Iron Dome works, the less sympathy the rest of the world has for a nation that remains under rocket attack.” Bloomberg’s Peter Coy reported from Jerusalem.