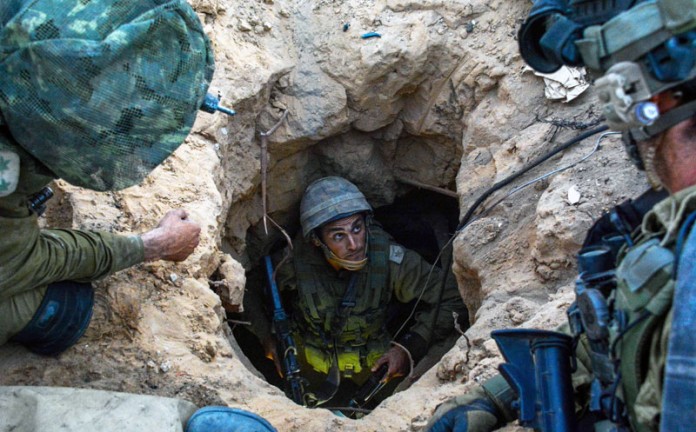 The Gaza strip provided an excellent terrain for the construction of the Palestinian subterranean network, established in the about 10 years, since Israel’s withdrawal from the area. Due to the soft soil and sand covering the majority of the area around Gaza, the Palestinians were able to dig those tunnels relatively quickly.

According to Palestinian sources, tunnels 300-400 meter long were dug within ‘months’, using ‘dozens’ of diggers working 24/7 in several shifts. Overall, tunnelling a source of steady income for many Palestinians in the Gaza strip, which suffers from extremely high rate of unemployment. Those families were digging and maintaining the tunnel infrastructure, charging service fees for all goods transported through these tunnels.

Like makeshift rockets and explosives constructed form ordinary materials and fertilisers provided by Israel, and international aid, the concrete and metal supports for the tunnels were also provided by Israel, in form of building supplies delivered to rebuild and develop the civilian constructions in the Gaza Strip.

The network comprised of three types of underground facilities:

Hundreds of logistical (smuggling) tunnels dug under the borderline separating the Palestinian Rafah from the Egyptian side of the city provided a source of living for many families in the southern Rafah area. Other tunnels located in the north and center, controlled by the militant governing Hamas, provided caches of supplies, weapons and ammunition.

Part of the Gazan subterranean complex is providing a protected operational space connecting buildings in urban areas, with the tunnels dug under open areas providing save passage for combatants, as well as hidden positions for mortar and rocket launchers.

Over a thousand such tunnels have been destroyed by the Egyptian Army in recent months, as part of the Egyptian effort to cease uncontrolled traffic from Gaza to Egypt. By 27 July Egypt’s army said it has destroyed 13 more tunnels connecting the Sinai Peninsula to the Gaza Strip, taking to 1,639 the overall number it has laid waste to.

The tunnels are often high and wide enough to enable a line of soldiers to move freely and rapidly. Tunnels are dug at a depth of about 20 meters (66 foot) below ground, and use several sharp turns and height changes, eliminating direct lines of fire. Exits are often supported by steps and ladders to facilitate rapid egress. As noted on The Washington Post’s Morning Mix blog, in the fall of 2013 Israeli soldiers found a tunnel that was 2.4 km (1.5 miles) long, 20-30 meter (66-99 foot) ) deep and equipped with electricity and provisions that could last occupants several months. Israeli officials estimated that it required $10 million and 800 tons of concrete to build.

Those strike tunnels are also supported by extensive infrastructure that secures those assets, gaining multiple paths of movement, alternative entries and exits, each pathway rigged with booby traps to protect the main path.

According to military sources the Israeli intelligence identified 38 strike tunnels which were briefed to the forces. Through the land phase of operation Protective Edge the IDF discovered 32 such tunnels and over 60 vertical shafts supporting those tunnels. According to IDF sources these were most of the tunnels the Israeli Intelligence has already knew about. Some are uncovered by heavy mechanical equipment and well digging equipment. Others are seized through known or uncovered accesses.

Inspection and mapping of those tunnels require extensive operations, that had to be undertaken in a combat zone, with large forces protecting a perimeter around those sites, enabling the engineers to conduct their complex subterranean operation. After the inspection phase, the tunnels are destroyed with explosives.

More articles in this series: