Ground robots can assist human activities underground, sometime even replace manned operations in certain applications. Missions assumed by robot are often safer and, in some applications, faster and more accurate, than those done by humans. As the human, robots also have limitations – particularly in autonomy, situational understanding to their dependence in operator input, which requires reliable communications, either directly or through entities, constantly connecting the subterranean operator to the surface.

Contemporary ground robots are operated in ‘remote control’ mode, requiring good operator skills to move the robot, understand their surrounding and manipulate their payloads. Some robots are already supporting semi-autonomous operation, enabling the unmanned vehicle to follow relatively complex sets of commands with a single instruction.

Semi-autonomous capabilities such as climbing stairs, gripping an object or rolling over often requires extensive control that will require a combatant to focus on the robot operation, rather on his own survival, therefore, rendering the robot irrelevant under combat in complex terrain. Semi-autonomous operation is therefore mandatory to make the robot combat efficient. The application of semi autonomous operation is often utilize advanced yet simple to operate man-machine interfaces and advanced robot operating systems.

Challenging communications and control are also common in operations in built-up and subterranean environment, denying GPS based position location and communications. The integration Differential GPS, (DGPS), interferometric radio-frequency (DF), acoustic (sonar) processing, inertial measurement and azimuth and distance measurement could compensate for better positioning in GPS denied environment. Some of these sensors could also enable some degree of semi-autonomous operation, and allow for several robots to operate simultaneously under a single controller, enabling faster area coverage, especially in indoors and in subterranean reconnaissance operations.

Some of the measures currently used can also provide solutions for subterranean operational challenges. For examples, tunnel scouting robots that are often lowered into the tunnels through ventilation shafts are using a tether – this tether can also deliver the power and communications link to and from the platform, enabling the robot to deploy on its mission unlimited by on-board power or communications range, delivering imagery and data in real time to the operators above ground.

From cave crawlers to tunnel scouts

In the early 2000s research projects such as the Groundhog and Cave Crowler developed at the Carnegie Mellon University paved the way for robotic cave exploration and underground archeological research. These projects later evolved into the Gemini Scout – a search and rescue robot developed at Sandia laboratories. Gemini Scout to assist in rescue operations in mines and tunnels. However, this large robot lacked the size and agility to be suitable for tactical missions.

In recent years the Pentagon, and more recently, the inter-agency Combating Terrorism Technical Support Organization (CTTSO) operating under the US Department of Defense. DOD funding directed at subterranean operations, mapping, situational awareness, navigation, obstacle avoidance etc. The Israel Defense Forces (IDF) and British Army have also acquired substantial numbers of MTGRs, for use as miniature, soldier portable UGV. Some of these robots have already entered operational use and are taking part in combat operations.

One of the robots found to be suitable for subterranean operation is the Micro Tactical Ground Robot (MTGR) developed by Roboteam. In 2013 CTTSO has allocated $15.6 million to evaluate and field these robots through 2015. Some 100 MTGR robots are already operational with combat teams of the Army Special Operations Command, Naval Special Warfare Command, as well interagency tactical units such as the FBI-Hostage Rescue Team, Border Patrol Special Operations Group, where they recently took part in detection of tunnels along the US-Mexican border in Tijuana. CTTSO plans to provide 35 MTGRs to interagency tactical units or domestic operations. The Israeli and British Army have followed CTTSO recently, fielding the MTGR man-portable micro-robot. Among the missions recently assigned to the MTGR are underground tunnel reconnaissance, a mission bringing the MTGR’s small dimensions and unique networking capabilities to bear.

In addition to special forces and other infantry units in the US, Israeli and British military, the California Customs and Border Patrol (CBP) tunnel task force has been using the MTGR on the US-Mexican border have expanded their surveillance capabilities with the introduction of MTGR robots provided by CTTSO. The robots already demonstrated their worth detecting smuggling tunnels linking Tijuana and San Diego.

Another robot adapted for tunnel surveillance is the Pointman Small UGV (SUGV). According to ARA over 50 Pointman Tactical Robots are already deployed with police, SWAT, government and first responder teams across the United States. This wheeled robot, built by ARA is currently has recently been used in tunnel detection, operating around Nogales, on the Arizona border.

The Counter Tunnel System project pursued and sponsored by the Office of Secretary of Defense (OSD) Joint Ground Robotics Enterprise (JGRE) under the Rapid Reaction Tunnel Detection (R2TD) Joint Capability Technology Demonstration (JCTD) was launched in 2011 and has reached limited field testing in 2013. A prototype robotic system for counter-tunnel operations, the Counter Runnel robot is designed to conduct exploration, mapping, and characterization of tunnels with high level autonomy, providing a safe and effective solution for three-dimensional (3D) localization, mapping, and characterization of a tunnel environment.

Other articles in this series: 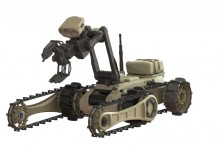 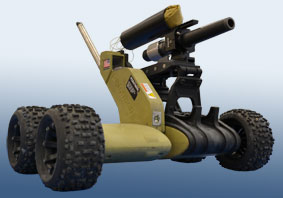