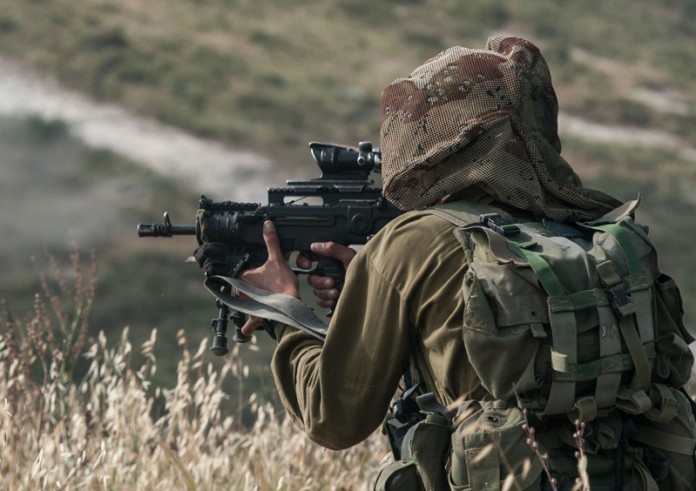 In recent years IWI US has introduced the combat proven Tavor SAR in the US market, where the weapon has created much interest both in the law enforcement community and among weapon enthusiasts. By March 2014 the company announced it had shipped the 20,000th Tavor SAR sold in the US.

The company positions its Tavor SAR as the weapon of choice for use as close quarter patrol rifle, since this compact weapon allows officers to operate and easily control the rifle with one hand, if the officer is signaling, using additional tools or controlling his K-9.

The flattop weapon incorporates a full length MIL-STD Picatinny top rail, in addition to the standard short rail, mounted at a 45° angle opposite the charging handle. Backup Iron Sights (BUIS) are embedded and spring loaded in the top of the Picatinny rail, and the front post contains a Tritium insert on a standard AR thread, fully adjustable for windage and elevation.

The Tavor family was developed in close cooperation with the Israel Defense Forces (IDF), based on lessons learned from actual combat. It has been proven in combat service by the IDF Infantry and Special Forces, as well as in other countries throughout the world.

The company also offers a compact version with 16.5″ barrel and fitted with an integral MEPRO-21 reflex sight (standard issue for the IDF). The standard caliber is 5.56 NATO (.223REM), with conversion kits available in 9mm Luger Parabellum and 5.45X39mm.

Adapting the weapon for the US market, IWI has introduced several changes. The body, offered in black or flat dark earth colors, is crafted from high-strength polymer. The weapon comes with removable 18” or 16.5” chrome-lined barrels with 1:7 twist.

To expand its US sales nationwide, IWI US introduced several ‘Restricted States’ models (RS) to meet local restrictions imposed by several states, including California, Maryland, New Jersey, and Massachusetts. For example, the weapon sold in California comes with 16.5” barrel, and 4” removable muzzle brake, while types sold in MD, MA and NJ use the standard 18” barrel with shorter, non removable, welded muzzle break. All versions support an AOL of 30”, and the standard 10 round magazines. They also do not have the bayonet lug available on standard models.

Another compact weapon offered by IWI in the USA is the Galil ACE pistol, available in 7.62x39mm caliber with an 8.3” barrel at an overall length of 18″. The weapon accepts standard AK-style magazines.

A feature of the Galil ACE is the new location of the charging handle. It has been moved to the left side, enabling the user to maintain control over the pistol while charging and also allows for faster target reacquisition. The safety selector is available on either the right or the left sides.

At Shot Show 2015, IWI US is introducing the Uzi Pro Pistol SB – the latest evolution of the legendary UZI sub-machine gun developed by Uziel Gal in Israel in the early 1950s.

Two versions of the Uzi Pro Pistol will be available in the US – the basic pistol and Uzi Pro SB, fitted with a side-folding stabilizing brace. Utilizing customized assembly originally designed for large-frame pistol control and stabilization, the Uzi Pro SB can be fired with or without the brace extended, depending on the shooters need. With the brace in the folded position, storage space required for the weapon is minimized.

The new Uzi Pro and Uzi Pro SB feature three safety mechanisms: a conventional, manual thumb safety, a firing pin block, and a proven grip safety that must be fully depressed before the gun can be cocked and fired.

This 9mm Luger Parabellum version available in the US market uses an advanced polymer pistol grip that reduces weight and incorporates an integrated magazine release button for fast and easy magazine changes. The cocking handle is located on the receiver side, allowing for a full-length Picatinny rail on the top receiver cover. A short Picatinny rail is also incorporated into the polymer body, mounted below the barrel, for additional accessory placement. Each Uzi Pro Pistol. comes with one 20-round and one 25-round magazine.