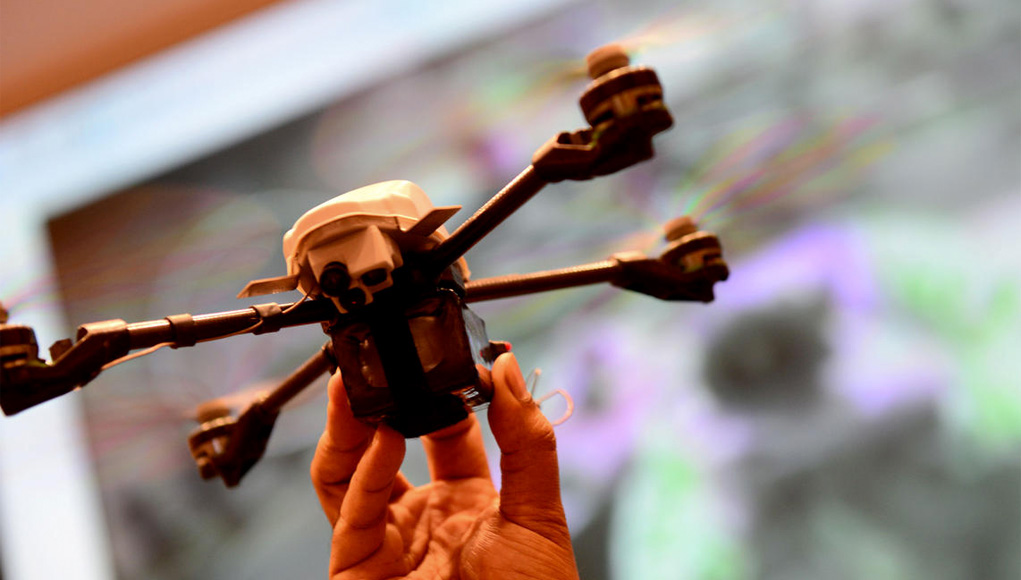 Over the course of the ongoing wars in Iraq and Afghanistan, roadside Improvised Explosive Devices have become the scourge of the United States military’s ordinance disposal units. The IED is a staple weapon of asymmetric warfare tactics, providing an inexpensive, easy to build and difficult to detect weapon capable of inflicting painful losses on a technologically and numerically superior enemy. With the evolution and proliferation of drone technology, ordnance disposal units are now facing a new and worrisome threat, the Flying IED.

This situation was brought to the forefront when a small drone crashed into a tree on the South Lawn of the White House in January. A radar system designed to detect flying objects such as airplanes, missiles and larger military drones failed to pick up the small two foot diameter quadcopter drone as it entered the restricted area around the White House. The drone was operated by a government employee for recreational purposes and was not deemed a threat to the First Family but the event drew the attention of military planners and IED disposal specialists.

If the White House radar system could not detect this small device, it is unlikely military radar systems protecting military installations would detect a weaponized drone. Even though the White House incident was declared an accident and not a threatening situation, military officials are concerned by the possibility that civilian and military targets could be vulnerable to drone attacks. The U.S. Central Command announced recently that it had attacked a remotely piloted aircraft described as a model planes in the possession of operatives for the Islamic State as it was being loaded into the trunk of a car. How operatives planned to use this miniature aircraft is unknown but it is speculated that its use was either for surveillance or as a weapon.

“I personally believe that the unmanned platform is going to be one of the most important weapons of our age,” Navy Capt. Vincent Martinez, commander of the Navy Surface Warfare Center (NSWC) EOD Technology Division, said. “I’m going to have to start thinking about not only how to diffuse the payload but how I defuse the platform. When I walk up on that platform, is it watching me, is it sensing me, is it waiting for me?”

Martinez said even a small drone such as the quadcopter that landed near the White House poses a high potential threat level. “Imagine the media event if it lands on top of the White House and detonates, whether it kills anyone or not,” Martinez said. Martinez emphasized that the seemingly harmless light vehicles could carry a payload of up to six pounds of C4 plastic explosive or multiple fragmentation grenades, giving them the ability to do considerable damage for a small platform. Such an attack could provide a propaganda coup for a terrorist organization by instilling uneasiness in the civilian population even if it inflicted no human casualties.

There is significant concern within the defense community that forces unfriendly to the United States can easily acquire these types of flying vehicles. The small drones are readily available and it is highly probable that existing technology would allow unfriendly forces to retrofit them, giving the aircraft the ability to deliver weaponized explosives or hazardous materials.

Military leaders are working diligently to stay ahead of those who would use these devices for harmful purposes. The National Defense Industrial Association recently held its annual convention in Bethesda, Md., where the issue was discussed at length. Martinez spoke to the group and outlined possible areas of innovation in the detection of drone-borne IED weapons, such as underwater explosive sensors that can quickly detect attacking drones; social media web crawlers that track IED discussion trends; and voice activated systems that could help technicians defuse bombs more quickly and efficiently. Martinez also revealed that sensors which detect video recordings have been employed successfully in the past because terrorists tend to film the preparation of their bombs and delivery devices for training purposes. Martinez also expressed the need for continued innovation in methods to combat IED’s.

These sentiments were echoed by Jerry Leverich, a senior analyst with the U.S. Army’s Training and Doctrine Command futures directorate. Leverich declined to detail specific methods used by the Islamic State but multiple reports have suggested it is responsible for many car bomb and vehicle borne IED attacks. The New York Times recently reported that the Islamic State acquired large quantities of fertilizer, a primary ingredient in homemade bombs such as the device Timothy McVeigh used to destroy the Alfred Murrah Federal Building in Oklahoma City in 1996.

The United States relies on superior technology to protect itself from such attacks in recent years but Leverich cautions that this strategy may no longer be foolproof as a deterrent. “Right now,” Leverich explained, “we are in a period of tremendous uncertainty and trying to determine what the singular threat is going to be is a significant challenge.” He added that “a $100 device [such as a quadcopter or model airplane], currently being used for surveillance can be quickly adapted for lightweight explosives.”

This article was published by the Homeland Defense Information Analysis Center (HDIAC).