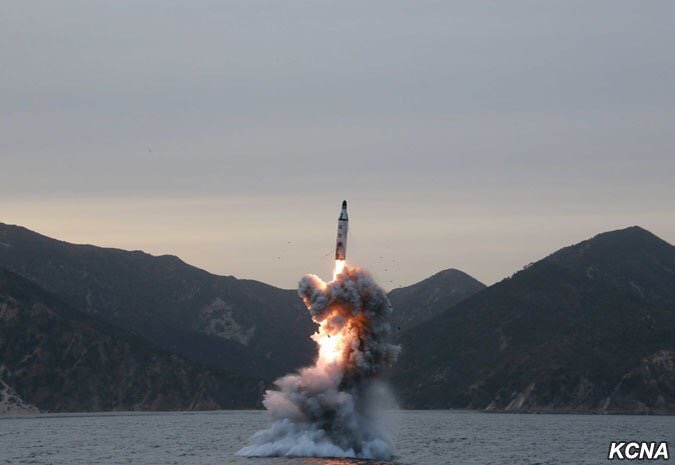 North Korea launched what appeared to be a ballistic missile from a submarine in the East Sea Saturday, the South Korean military said.

According to the Korean Joint Chiefs of Staff (JCS) the projectile that it believes was a submarine-launched ballistic missile (SLBM) was launched around 6:30 p.m. (local time) from the 2,000-ton Sinpo-class submarine. The JCS added that the missile flew for only about 30 kilometers, well short of the minimum SLBM range of 300 km. South Korean news agency quoted a government official saying the missile was airborne for ‘couple of minutes’ (it is likely meant seconds) South Korea’s defence ministry said the missile, fired from a submarine in the Sea of Japan (East Sea), flew around 30 kilometres (18 miles) and that the test showed “certain technological progress” in the North’s SLBM capability.

“It is believed… that the North would be able to deploy the SLBM weapon within three to four years, or even sooner if it dedicates all its resources on the project,” South Korea ministry spokesman Moon Sang-Gyun told reporters n Seoul.

The short flight range and duration does not necessarily indicate a test failure, but another step in the North Korean SLBM development. Pyongyang has already tested submarine launched missiles in 2015, as reflected by photos of leader Kim Jong Un watching the event.

Experts say that an “ejection” test is usually conducted in the early stages of developing SLBM capabilities, and Pyongyang is believed to still be many years away from developing an SLBM. The North’s SLBM capability, if fully developed, would pose a serious threat because of its mobile nature. South Korea’s defence ministry said the missile, fired from a submarine in the Sea of Japan (East Sea), flew around 30 kilometres (18 miles) and that the test showed “certain technological progress” in the North’s SLBM capability.

Last month, a U.S. news report claimed that North Korea had conducted a ground test of an SLBM, the KN-11. The Washington Free Beacon said the test on March 16 involved an ejection test of the KN-11 from a canister at Sinpo shipyard on the North Eastern coast.