Iran conducted the first launch of the ‘Simorgh’ last week, Tehran’s largest satellite launch vehicle, and what the Pentagon views as a key element of its effort to build long-range missiles. Although Iran has not confirmed the test flight, both US and Russian sources reported the event, but the sources are not in agreement whether it was a success, part success or failure.

The Russian Ministry of Defence confirmed the launch event, as a ‘suborbital launch of unknown ballistic missile has been occurred at 09:33 UTC on April 19th”. The Russian source said that, according to preliminary data, the launch was successful, as the burned out rocket impacted in the southern part of Iran. US sources are more ambiguous; U.S. intelligence agencies described the event to be ‘partly successful’, as the payload did not reach orbit, said defense officials familiar with reports of the test. The missile was launched from the new Imam Khomeini Space Center (map).

“Strategic Command’s Joint Functional Component Command for Space, which tracks thousands of orbiting objects in space, did not monitor any new objects reaching orbit on Tuesday”, the command’s spokesman Lt. Col. Martin O’Donnell said. ‘It was either an unsuccessful launch, or a test of ‘third stage’, not meant to place a satellite in orbit, said a U.S. defense official familiar with reports of the test.’ (The Simorgh launcher has only two stages – T.E.)

The large liquid-fueled rocket has been under close surveillance by U.S. satellites and other intelligence assets at a launch pad at Iran’s Semnan satellite launch center, located about 125 miles east of Tehran. The Simorgh launch had been anticipated since March and comes amid growing worries about Iran’s development of long-range missiles. The Simorgh also is assessed as having enough lift to carry a nuclear warhead, a throw-weight greater than the 100 kg payload capacity claimed by Iranian officials.

According to Iran’s Space Agency officials, the first generation of the satellite carrier is capable of carrying communications and sensing satellites as heavy as 100 kg to orbits some 500 km above the earth. Head of Iran’s National Space Center Manouchehr Manteqi described last month the planned Simorgh test program having three phases – two test launches will be carried out in spring and late summer of 2017, and a third launch, planned for early 2017. The objective of the tests is to place Iran’s Toloo satellite in orbit.

Toloo is the first of a new generation, hexagonal shaped satellites designed for remote sensing and Signals Intelligence (SIGINT) reconnaissance, being built by Iran Electronics Industries (IEI). Toloo has a base diameter of 86 cm and height of 100 cm. The EO payload will be able to acquire images of earth at a resolution of 50 meters. Unlike Iran’s first experimental satellites that remained in space for days, Toloo is expected to remain in orbit for 1.5 years. Another mission of Simorgh is to lift the 80kg Autsat scientific satellite to LEO. Autsat is designed for a mission lifespan of 3-5 years. 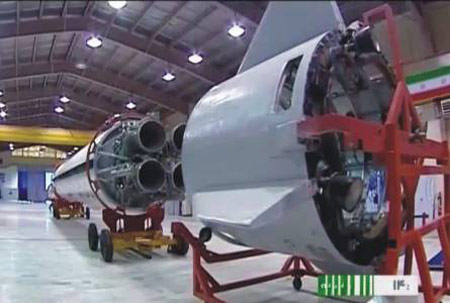 Simorgh, also known as Safir-2, is designed to be able to lift a payload of 350 kg to low earth orbit (LEO), using a 27 meter long, 2.5 meter wide launcher weighing 87 tons. The first stage has four main engines (likely North Korean Nodong engines, also used with the North Korean Unha satellite launcher), developing a lift off thrust of 130 tons, this thrust is four times more powerful than the Safir, which was used to lift Iran’s experimental satellites to orbit. Simorgh uses an extended upper stage of the Safir as a second stage.