Following the evaluation of different overhead weapon stations and turrets designed by several Israeli defense companies, the MOD opted to follow an independent design optimized for a ‘Medium Turret’ for the next generations of combat vehicles currently under development. These include the tracked Namer and wheeled 8×8 Eitan platforms. The future Carmel multi-purpose combat vehicle now under development will also use an unmanned turret in its combat support vehicle, which will mount 30/40 mm automatic cannon and missiles.

The gunner’s sight is fixed and aligned to the gun’s line of fire while the commander’s sight uses the same payload in rotatable installation, enabling the commander to look around and search for targets while the gunner engages known targets. The turret being tested also has a 60mm mortar installed (similar to the Merkava MBT) but does not have the retractable Spike LR missile launchers expected to be included in the production series.

Some Israeli unmanned turrets provide access from within the vehicle, to maintain the weapon systems and overcome malfunctions under armor. It is not clear whether this new turret provides such access.

According to the IDF, the turret unmanned turret is designed with a low profile and does not need an opening for the turret ring, as it mounts on top of the vehicle’s armor. Attachment on top of the armor enables easier upgrading of existing vehicles. The main gun uses a double feed of 200 round ammunition chains while the coax MG loads 700. Four panels provide access to weapon systems and storage on the main turret, with additional panels can be seen on the flanks. The Namer turret also mounts six smoke canisters installed at the front of the turret. In addition, the AFV has 12 additional hull-mounted smoke canisters. All systems, weapons, and sensors are operated by the three crew members – driver, gunner, and commander – seated inside the vehicle.

The design of the ‘Medium Turret’ was weight conscious, to enable installation on the 8×8 Eitan wheeled armored vehicle whose weight load limit is significantly lower than Namer. The 30mm turret will be fitted to few of the Eitans, others will receive a lighter variant of the turret, mounting a 7.62mm or 0.5 Cal heavy machine gun. The use of standardized turret will augment the vehicle’s protection and optimize the integration of sensors, active protection and advanced situational awareness capabilities on new and existing vehicles.

The introduction of such turrets on Israeli armored fighting vehicles will improve the combat capabilities of infantry and mechanized units, particularly in urban areas, where they will improve organic firepower of the unit and minimize their dependence on combat support. 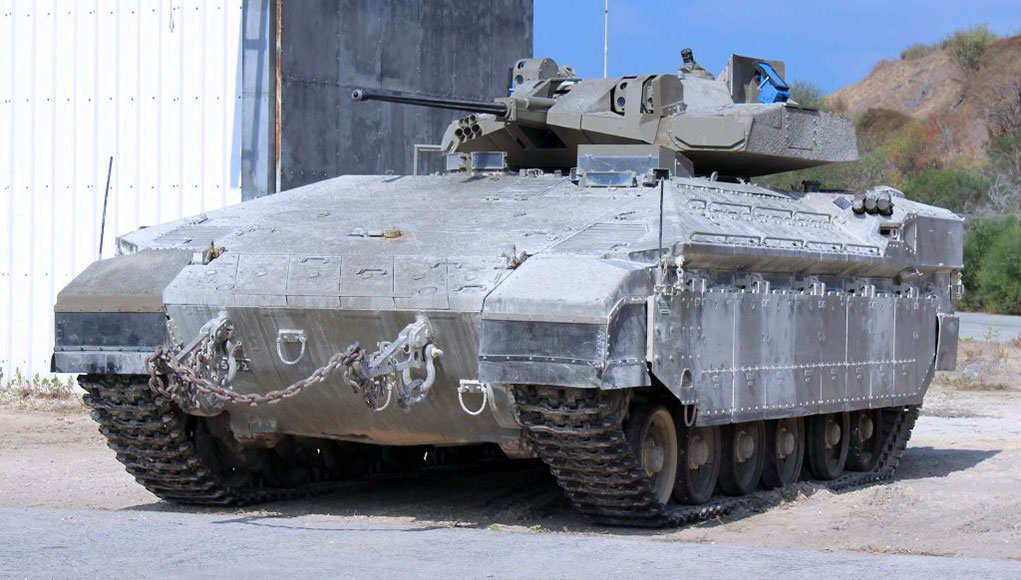